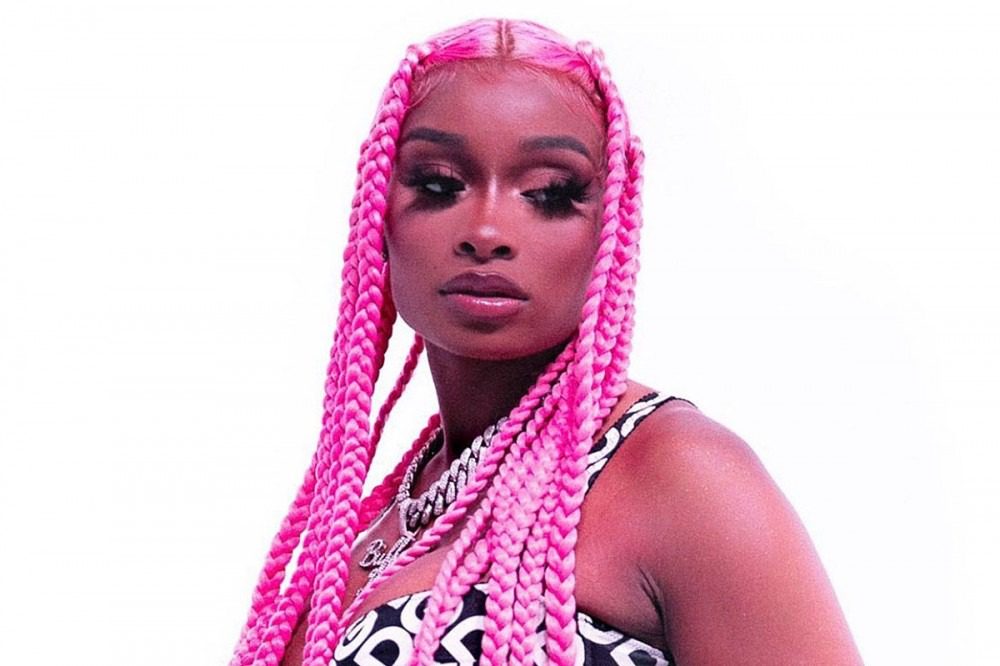 The old saying goes "It ain't where you're from, it's where you're at" (shout-out to Rakim), but for Armani Caesar, it's both. The first lady of Griselda Records got her start rapping when she was 12 years old. Thanks to a chance meeting at a local studio in her hometown of Buffalo, N.Y. in 2007, she was rhyming alongside Benny The Butcher and Conway The Machine as part of the early-2000s rap collective Buff City.

Those relationships are exactly why Westside Gunn signed her to Griselda Records this past March. He already knew she could rhyme, wrote her own verses and could bounce between the sounds of grimy New York rap and bass-heavy Southern hip-hop. Now with her new album, The Liz, released in September, she's basking in its positive reception, along with success of her clothing boutique Armani's Closet. All Armani wants to do is keep working; this story was a long time in the making.

During her time as an active member of Buff City, Armani moved to North Carolina to go to school in 2008, opting to be a student and put more time into that than rapping. Her passion for hip-hop came right back to life when she began writing rhymes in her dorm room. She also enrolled in 9th Wonder's Hip Hop in Context class, a course he taught at North Carolina State alongside Kid from Kid N Play. She felt inspired to dig into the classics and important artists of early hip-hop, taking rap even more seriously.

During this time, she kept releasing material, like the 17-track project Caesar's Palace in 2015. After that, Armani spent some time working as a stripper, but the hustle to get her music heard didn't stop. While radio was one way to get heard, the rising rapper knew she had more music to promote but didn't have the budget to do so. Before those radio spins, Armani decided to go hard on the video-sharing platform Triller in 2015. Clips of her songs "Get Trippy Freestyle" and the Ma$e-produced "Can't Take Him Back" began to blow up on Twitter and Instagram two years later as a result of her consistency on Triller. She even got "Can't Take Him Back" played on local radio in 2018. Her buzz picked up from there,  which got her back onto the radar of Westside Gunn. From there, the rest is history.

Catch up on Armani's journey in this week's edition of The Break.

I grew up listening to: "Everybody. From Dipset, Lil Wayne, [Lil'] Kim, Foxy [Brown], Biggie, Jay-Z, a little bit of everybody. I just love music. Missy [Elliott], Lauryn Hill, the Spice Girls, Gwen Stefani. I didn't really have a favorite, I just listened to so much music. I had playlists and moods. This was around the time Limewire was heavy, so once I got a hold of that, it was over. Putting viruses on my mama computer."

My style’s been compared to: "Nobody current. Even people who say that I sound like a Foxy, they'll say that, but then they'll be like, 'But it's still you. I can hear you through it." It's more so like that feeling, like a breath of fresh air. People are missing that sound, and it was a  void in there for a long time because the South kinda took over. And you can even hear it in the female rap. It's like a lot of it has more Southern sound to it."

I’m going to blow up because: "I just never gave up. I didn't think it was gonna work out, but it was something in me. I just couldn't stop doing it—even if I wanted to. I would be feeling a way, and then I would go write, and I would go to the studio, and record something, and be like, Yo, this shit is hard. Or even with my deal, I had got my first deal like years ago, like 2016. When you coming up, getting a deal, Oh, I made it! And ain't shit happen. Just prayer, faith, because any time that I got the answers right, it was because I guessed nine times out of 10."

What’s your most slept-on song, and why?: "I got a project called Pretty Girls Get Played Too that I had dropped well before I got signed. That I think is fire that people haven't heard. '1990 Caesar,' another one that's fire that a lot of people didn't hear yet. I might redo those songs on different beats so that I can actually distribute them publicly, because they all kinda mixtape-ish."

My standout records to date have been: "'Simply Done' with me, Benny [The Butcher] and DJ Premier. The 'Lil Cease' record I did, on Westside's FlyGod Is An Awesome God 2 [album]. That was huge ’cause everybody….I've never seen so many people recite that verse, which is why I'm so tight. I can't wait for the world to get back at least semi-normal because I'm ready to start doing shows. It's so many people, they'll comment under my pictures [on social media] with my verse, just all of the reposts I be seeing, and really and truly, more than half of them be men. That's so fire to me."

My standout moments to date have been: "Getting a write-up in the Buffalo newspaper [The Buffalo News] on the first page. That was fire because that's home, and a lot of times, it takes you leaving home, and coming back to really get your flowers and acknowledgement. So, to see everything come full circle, that was fire. I wish they would've used a different picture though. My grandmother was probably looking like, 'What the hell! You got a bra on the newspaper!'

"And this year as a whole, everything kinda been back to back so much, I really haven't had a chance to smell the roses just because I'm on to the next thing."

Most people don’t know: "I'm really low-key a nerd. I like learning about shit, all day, every day. I read, I watch YouTube, I graduated from YouTube University. Everything from my business even down to how to organize. I like to organize shit; that calms me down. I'm a Christian, even though you may not look at me and see, I'm very much heavy on the God."

I’m going to be the next: "Female rap mogul."