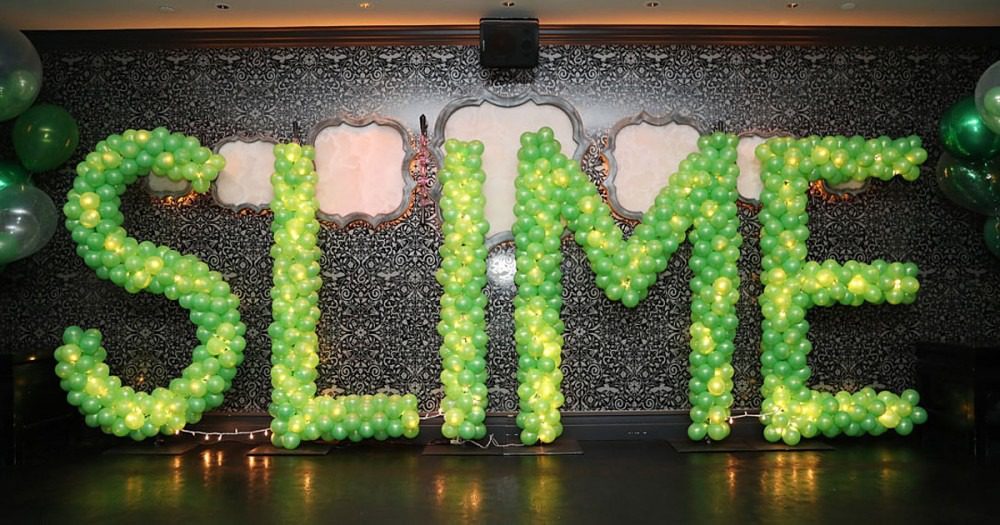 In the pantheon of rap slang, few terms have enjoyed the ascent of slime, a word that first surfaced in the late 1990s before permeating hip-hop and viral culture throughout the 2010s.

Not to be confused with an elastic, sticky substance or the viscous, green glob that became a staple of Nickelodeon game shows years ago, slime is generally a synonym for a rapper's day ones or anyone else that’s part of their proverbial team. As an adjective, when used in its “slimy” form, it can be a stand in for something extra street, a la Future and Young Thug’s 2017 mixtape Super Slimey.

To see or hear the word in action, all you need to do is take a stroll through the catalogs of Young Thug, Gunna, Future, Lil Keed, Young Nudy and more. When it’s not on songs, it’s used in casual conversations and Instagram captions, whether those captions belong to rappers, trappers or even the school valedictorian who listens to Thugger too much. For a new generation, it's an adjective as much as it's a way of life.

“Everybody can’t be slime," Keed tells XXL. "It’s something that’s in you, not on you. Slime is it’s own person; it’s not just a word. You have to be wavy, you have to be different, you have to set trends, you have to be a leader. Everyone has to want to follow you and want to do what you do.”

Lil Keed's definition of the term is probably a little more aspirational than the one initially used by N.O.R.E., the rapper who's generally credited with introducing the term to hip-hop. In the music video for his Capone-assisted 1999 single, “Blood Money Pt. 3,” N.O.R.E. can be seen ordering from a Chinese restaurant. While ordering, he calls the person he’s ordering from “slime,” and that, as far as we know, is where the legend begins.

N.O.R.E. would continue using the slang term at other times. For “Hit Me Slime,” the intro track to his 2002 album, God’s Favorite, the rapper jumps on a phone call and during the conversation, the person on the other end of the phone calls him slime. The LP also has a track called “Holla Back Slime.” For good measure, N.O.R.E. eventually dubbed himself the Slime Father.

While the word had been introduced into the rap lexicon no later than 1999, it would be some years before it reached the mainstream. One of the chief purveyors of slime language was Harlem rapper Vado, who began gaining steam after he teamed up with Cam’ron to form The U.N. in 2009. Vado used slime as an ad-lib or a call-out at the beginning of his songs, and his Cam'ron-featured 2010 track “Speaking in Tungs” offered a framework for how to use the word. “You go slime, it's your time,” Vado raps on the hook for the song.

A little more than a year later, after Vado had been heard using the word, Lil Wayne dropped a slime reference as well. The use of the word has been linked to gang affiliation and Weezy, who's previously pulled out a red bandana during a 2016 ABC News interview and said, "I’m connected to this muthafuckin' flag right fucking here. I’m connected. I’m a gangbanger,” has touched on that in his rhymes. “It's only me and her ’cause the Bugatti a coupe/It's Blood gang, slime, but I parlay with Snoop,” Weezy raps on “Miss Me,” a Drake track from Drizzy’s 2010 debut album, Thank Me Later.

As artists like Vado and Lil Wayne continued using the term, fans started following suit. However, some rap fans weren't aware of the history and not always knowledgeable on which rapper started the use of slime in hip-hop. After artists, kids from the block to the suburbs and everywhere else began using slime, N.O.R.E. jumped on Twitter in 2009, to clarify that he was the one who brought the term to hip-hop.

"Alot of niggas using the word slime y'all funny just pay respect were respect due Niggas swagga jacking me crazy got love for y'all tho pow," N.O.R.E tweeted a year later. "I started this slime shit !!! Is this the mother fucking thx I get !!! Haha.”

For his part, Vado never had any issues giving props. In a 2010 interview, Vado explained that he got the term from a friend who probably got it from N.O.R.E. While most signs point to the Slime Father introducing the term to the game years ago, the origin of the slang itself is much harder to lock down. In other words, who introduced the word to him? And who introduced the person who introduced N.O.R.E.?

The origin story for the word slime remains elusive, but its impact is obvious. Taking the baton from Vado, Young Thug made that much clear. Between 2015 and 2016, Thugger kept the word in the minds of fans everywhere with his Slime Season series, releasing three volumes of the mixtape during those years.

In the fall of 2018, he dropped off a Young Stoner Life records compilation album called Slime Language, a project that included guest spots from Lil Baby, Gunna and Lil Keed, three Thugger disciples that would also carry on the tradition of using slime in their lyrics. You can hear the word slime featured prominently on songs like “U Ain’t Slime Enough,” and Thug's Lil Uzi Vert-featured track “It’s a Slime” and “Slimed In.” The snake emoji has become synonymous with slime and slatt, with the latter term being the latest addition to the slime family tree.

To Goose, a producer who's frequently worked with both Young Thug and Lil Keed, the word's resurgence from the 1990s to the 2010s to 2020 is just part of the rap culture cycle. "I think music changes every generation and the same things can become popular again," he shares. "I feel like this is one of those things. Who ever was saying it during their time gets credit for making it popular."

For now, artists like Thugger and Keed, and many more, are keeping slime alive and thriving. "[Young] Thug and [Lil] Keed music is so good," Goose adds. "I think it's natural for people to want to gravitate towards that. Their style and music go hand in hand."

Dr. Aaron Smith recognizes that there are key factors in the word sticking around for over two decades. "Factors that contribute to the lasting or recurring impact of slang terms include who originated or popularized the term," he explains. "N.O.R.E.'s Drink Champs comeback even plays a part in fueling the resurgence of the term. Contemporary relevance of said term and even relationship to other slang terms in use. Example [of] slugs equals bullets, snakes equal fake friends, slob equals gang member, wipe his nose equals handle aggressively, all relate loosely to the term slime in sound, linguistic structure or imagery conjured by related terms. Slime fits well in the contemporary slang lexicon for a myriad of reasons."

In rap, few things are permanent, and more often than not, you can count on terms and trends going out of style just as quickly as they jumped into it. Some 21 years after it was introduced to hip-hop, slime language continues.