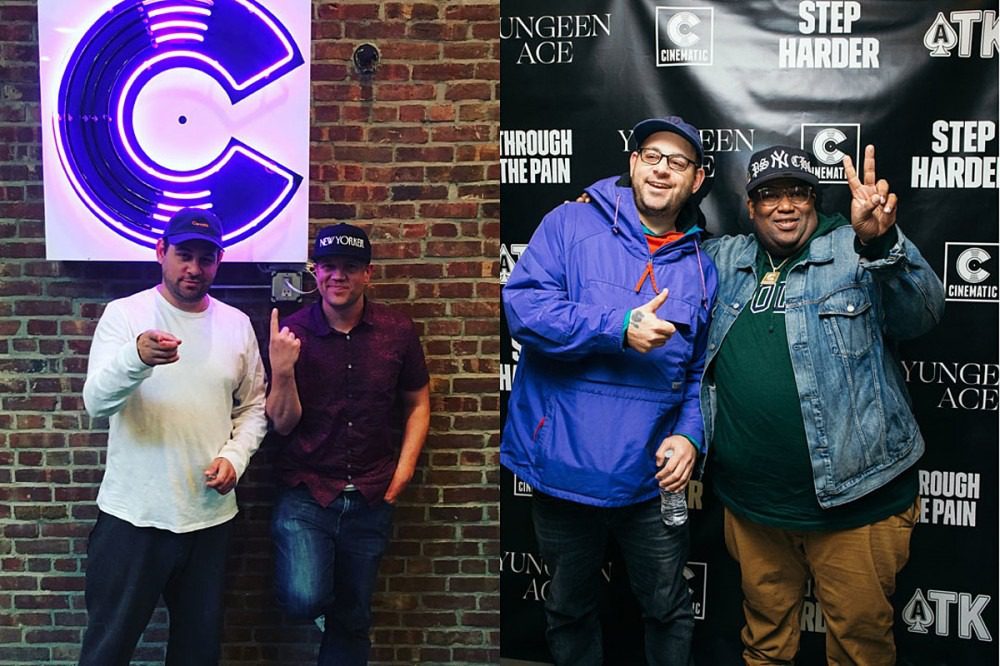 U See Us
With streams in the billions, more certified platinum plaques and a growing roster of rap talent, Cinematic Music Group is giving the major label machine a run for its money.
Words: Georgette Cline
Editor’s Note: This story originally appeared in the Fall 2020 issue of XXL Magazine, on stands now.

Twenty years ago, Jonathan Shapiro learned a valuable lesson during his time as a manager for Foxy Brown and Nappy Roots: the music industry is difficult. The trials and tribulations he experienced as a music manager could’ve relegated the New York native to stick to DJing or producing, but Shipes, as he’s known, powered forward with the launch of his full-service, “majorly independent” imprint, Cinematic Music Group, in 2007.

“All that built up my tolerance and understanding for how difficult the industry is,” Shipes, 40, shares from inside the comfort of a former firehouse-turned-record label offices in Brooklyn. “And how much you’re gonna get knocked down and fired and shitted on and defeated before you catch a real win, you know? And if you’re not built for that, then this is the wrong industry for you because, you know, it’ll chew you up and spit you out.”

The wins back in the early 2000s weren’t substantial, but Shipes’ tenacity paid off. He’s responsible for ushering lauded rappers Joey Bada$$, Nipsey Hussle and Big K.R.I.T., among others, into the spotlight as Cinematic artists. The end result of his working relationship with guys like these is the timeless music Shipes helped deliver to the world: Nip's Bullets Ain’t Got No Name Vol. 1, K.R.I.T.’s K.R.I.T. Wuz Here and Joey’s 1999.

“It’s crazy,” Shipes explains of those releases. “I know my ear is like one of the best in the game, so I understand how it happened. I’ve definitely given the world some crazy timeless music. And that’s what it’s really about, right, especially if your motto’s ‘For the Love of Music.’ I might not have sold the most records, yet, right, but I’m only 40. I’m just getting started. I definitely have cemented some legendary music, which is the most important shit to me.”

With over 20 years in the music business, Shipes is an accomplished talent scout whose creativity has also turned a love for his pet dogs and cats into an animated series called Shipes Zoo. His priority is being invested in his artists, though—even those no longer on his roster. He’s been rocking with Smoke DZA, Cinematic Music Group’s flagship artist, since 1999. Eight years later, he welcomed Sean Kingston to Cinematic in 2007, during a time when Shipes says, “No one believed in me, not a fucking person.” A year after that, Shipes signed Nipsey Hussle to a label deal at Epic Records. Then K.R.I.T. joined the Cinematic fold in 2010, and subsequently, Joey in 2012.

Today, Cinematic is home to 28 artists in its label division (Flipp Dinero, Luh Kel, Yungeen Ace, Abby Jasmine, JayDaYoungan and Smoke DZA, to name a few), seven artists in its management arm (Cam’ron, Styles P, JayDaYoungan and Luh Kel, among others), six in the publishing branch (producers like Levy Grey, 11vn and 183rd) and five artists in its distribution faction (Lil Tracy, Quadry and more). Shipes, along with his team of 40 employees, are putting in work to ensure the 46 artists on the roster, ranging from rappers to bedroom pop singers, have the necessary tools to succeed.

Two years ago, Cinematic artists’ music brought in roughly half a million streams. In 2019, the label released 53 albums and EPs, doubling that previous streaming number with over 1 billion on-demand streams. Plus, five of their artists had projects land on the Billboard 200 chart: Yungeen Ace’s Step Harder at No. 81, T-Pain’s 1UP at No. 115, Flipp Dinero’s Love For Guala at No. 132, Cam’ron’s Purple Haze 2 at No. 180 and Luh Kel’s Mixed Emotions at No. 188. Aside from these artists’ lyrics resonating with fans and earning chart placements, those feats are also thanks to Cinematic’s staff.

According to Shipes, who also found success as an entrepreneur with his The Smoker’s Club Tour and cannabis brand, as well as Felt clothing brand, Cinematic is a family environment with management executive Hovain Hylton, Vice President Drew “Dru Ha” Friedman and Chief Marketing Officer Chris Herche teaching him certain tricks of the trade while sharing his own with them. He’s proud to say he has a team that will “get me through the championships.”

“My biggest success is that I’m able to just like, keep pushing when I’m down, and was able to really build a whole staff out of nothing,” Shipes admits. “And that really is like, crazy ’cause when you think about managing, forget the artist for a second, all the stuff you have to do for them, and then, the fact that I produce music and all these other things, I’m also managing a staff that I’ve never had to do before, and didn’t even know how to do a few years ago.” Now the company structure works to their artists’ benefit as well as their own.

Hovain Hylton has been an integral part in helping Jonny’s management firm flourish since joining the team in 2017. The right to Jonny’s left, the 35-year-old Brooklyn native heads Cinematic Management (formerly Left Right Management), the artist management division of Cinematic Music Group specializing in rising artists and veteran hip-hop talent. Think of Jonny and Hovain’s own synergy at Cinematic like that of Def Jam founders Rick Rubin and Russell Simmons.

“Jonny says he’s Rick Rubin and I’m Russell Simmons,” conveys Hovain, an 11-year music industry veteran. “Rick Rubin was a genius like Shipes. Shipes is a genius. He likes to smoke weed. He likes to be kinda in the crib. He’s not really a outgoing, party type of person. He produces music. So that’s how it goes. Shipes produces music, finds artists. I’m out and about in the mix of making deals happen. I’m shaking hands, I’m kissing babies. But when you saw Russell, you thought Def Jam. When you saw Rick Rubin, you thought Def Jam. [Jonny and I] have a mutual respect for each other’s talents and strengths. That’s why it was gonna be called Left Right anyway because what your left hand can’t do, your right hand could do.”

Currently, the Cinematic management roster includes artists like Cam’ron, Styles P, Smoke DZA, Luh Kel and Xanman. One of Hovain’s greatest highlights with Cinematic so far is having singer Luh Kel’s 2019 song “Wrong,” an ode to a ride-or-die chick who’s no more, go platinum. The track, produced by Shipes, 11VN and BubbaGotBeatz, has over 140 million Spotify streams and counting. “The next two songs, 'BRB' and 'Pull Up,' he put out after that went gold, on their way to platinum,” Hovain recalls. “So it was like, wow, the first three things we did together were hugely successful.”

Kel, a native of St. Louis, signed to Cinematic Music Group in April of last year after Shipes and A&R Abby B. contacted him following his song snippet going viral. While Kel is inherently a melody-driven R&B singer, he’s got the hip-hop sensibilities that make him a perfect fit at Cinematic. “[Shipes] wanted me to do what I wanted to do instead of them trying to turn me into something I’m not,” Kel maintains of his early signing talks. “And I just liked that, you know what I’m saying? It’s genuine. Usually, labels, they try to turn you more hip-hop or pop or things like that, like a Disney character or something. But that’s just not me. Cinematic, it kept me in like, the cool, R&B, chill type of lane. And that’s me.”

Fellow Cinematic signee Flipp Dinero joined the label in 2016, and entered a major label joint deal with DJ Khaled’s We The Best imprint and Epic Records two years later. He’s earned his own two-times platinum track with “Leave Me Alone,” and dropped two projects, The Guala Way and Love For Guala, with Cinematic. “One thing I can say about Cinematic as an independent label is that they definitely move as a major, you know what I mean?” the Brooklyn rapper affirms. “They do a lot of things on the major scale even though they’re the independent label. They didn’t just make me feel like I was an artist on the label. They paid a lot of attention and they helped curate Flipp Dinero and the brand.”

Flipp’s words are a testament to Shipes’ vision when seeking new artists to sign to Cinematic. “Zero followers or a million, I’m looking for true talent, real superstars and then I’ll help develop you all the way up,” Shipes expresses. Five years ago, Cinematic was in a different place, from its roster to internal structure, but that message of support from the ground up has remained the same. “Now, hopefully we keep evolving, pressing forward and pushing the culture forward,” Hovain adds. “And continuing to put artists in a better place than they were when we found ’em.”

The goal for the Cinematic Music Group team in another five years is to continue to make timeless music and become the No. 1 label in the world in the independent space. Jonny Shipes wants the top slot from whoever’s considered the best. “I’m not a small thinker,” Shipes declares. “If people don’t laugh at your dreams, you’re not dreaming big enough.”