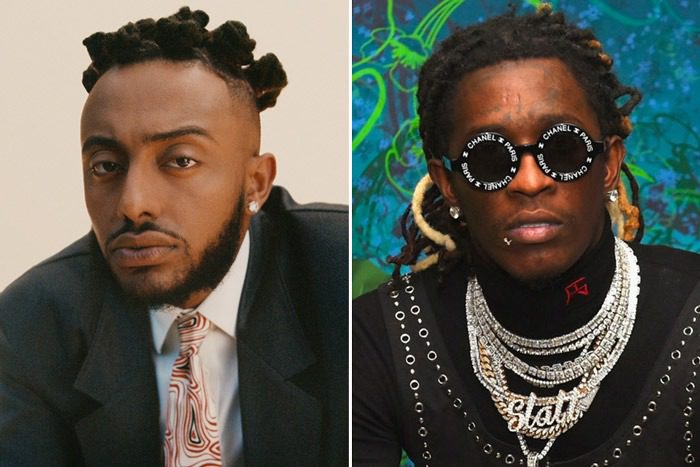 Aminé links up with Young Thug on his new single “Compensating.”

Over a bubbling beat, produced by T-Minus, the Portland rapper reflects on a breakup. “I fu**ed up once again / You know that I’m never too proud to beg / It’s hard to admit that I made my bed / You know I’ma always wish you the best,” he raps before Thug delivers a squeaky verse.

Speaking with Apple Music, Aminé revealed how the collaboration came together. “I was in Toronto working with T-Minus on this song and I put the hook together and then Minus told me he had a session with Thug and he thought that we would mesh well together on this song. And he was the one who kind of quarterbacked the whole thing,” he said.

Prior to that, he had only met Thug once before at the Way Out West festival in Sweden. “He walked up to me and called me a young legend and I never forgot that moment,” he said. “Everything he does is just him. It’s never too thought of, he really just is himself. It’s like real life alien.”

The song arrives ahead of Aminé’s long-awaited album Limbo on Aug. 7. The project has already spawned the singles “RiRi” and “Shimmy.” He also recently teamed up with Disclosure and Slowthai on “My High.”

“We’ve been working on this for like two years now and I worked on this way before OnePointFive,” he said of his 2018 project. “I put out OnePointFive just as a placeholder for people. Because I was tired of working on this album. It was really draining for me, emotionally. I was writing the records that are going to live for the rest of my life. Yeah, I was trying to find something that’ll really define my legacy.”