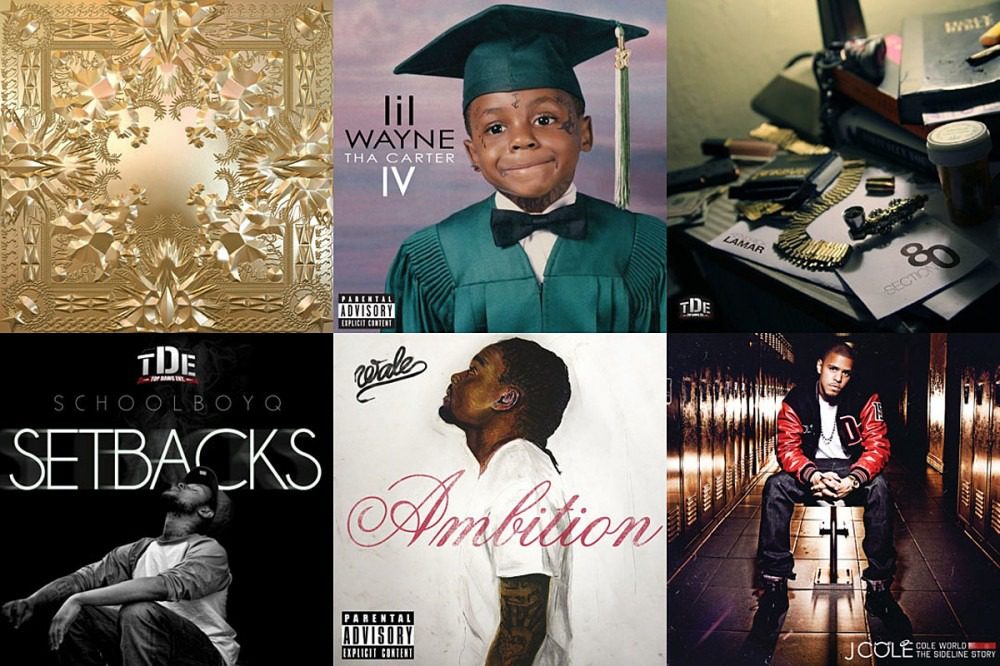 Music serves as an intangible time capsule that evokes emotion and resurfaces memories, both good and bad. For most people, they’re able to pinpoint where they were and what they were doing when they heard an album for the first time. Listening to the songs that make up that project takes them right back to that moment.

Ten years ago, hip-hop was in an incredible place, filled with some hungry, burgeoning rhymers at the onset of their careers and navigating the music industry based on their passion to rap. Their big breaks had already happened and their debut or sophomore offerings set out to prove why they rightfully deserved their spot. Then there were seasoned vets that capitalized on an opportunity to create an unforgettable album to add to their legacy.

Jay-Z and Kanye West's Watch the Throne highlights the two esteemed MCs' creative chemistry and hitmaking mastery. From the rallying cry of "No Church in the Wild" with Frank Ocean and The-Dream to the opulence of "Ni**as in Paris," the big brother-little brother team crafted an album that has been deemed a classic. Looks like there could be a follow-up in the works, too. Lil Wayne proved his Tha Carter series was still a fan favorite with the revered work of art that is Tha Carter IV. The endearing ode "How to Love," soaring track "She Will" featuring Drake and the Cory Gunz-assisted "6 Foot 7 Foot" make this one of the top albums to arrive in 2011.

For Wale, his sophomore album, Ambition, exemplifies a steadfast goal to live out his dreams. Thought-provoking bars, solid production, the aptly titled track "Ambition" with Meek Mill and Rick Ross and the hit "Lotus Flower Bomb" featuring Miguel are among the standouts on this effort. J. Cole's Cole World: The Sideline Story cemented his spot in the game as an admirable MC with this debut effort. Moving between introspection and boasts, producing the bulk of the project and delivering bangers like "In the Morning" with Drake add to its appeal.