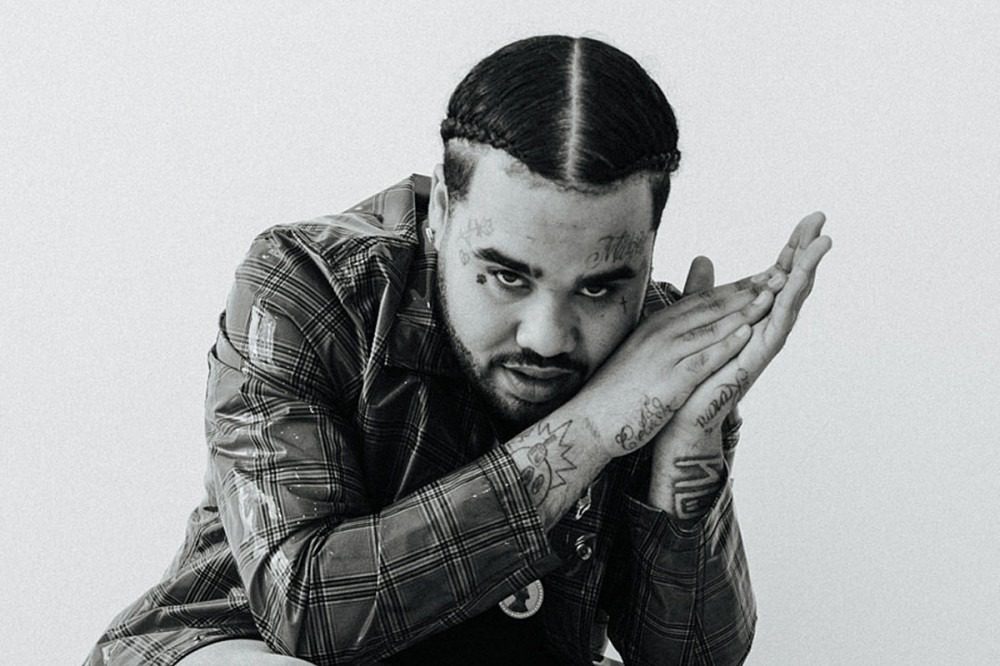 Following in a family member's footsteps turned out to be a good thing for West Coast rapper Rucci. Back when he was a 5-year-old kid in Inglewood, Calif., Rucci, known by the nickname Midget in his younger years, saw rap as something he did for fun with his uncle P Funky, who was also an artist. That time spent rapping helped him develop his skills. Now, he's grown into something of a people's champ on the West Coast due to his music showcasing a clear-cut ability to turn up a party as well as his lyrics being vulnerable and honest. He tends to detail his experiences in the streets and his family's connection to them.

In 2010, the SWAT team raided a home, which led to his father and uncle P Funky being swept up on attempted murder charges. His dad eventually got deported to Mexico. P Funky was sentenced to 35 years to life in prison, and is still incarcerated. In addition to those incidents hitting home for Rucci, his close friend and fellow rapper Sean Mackk died as a result of a shooting in July of 2017. All of these factors motivated Rucci to keep pushing with rap. He has a wealth of songs and seven projects to his name with his breakout effort being last year's Tako's Son album.

Tako's Son established Rucci as a name to watch on the West Coast, thanks to the sense of familiarity he brings. He's clearly a West Coast rapper, but he isn't derivative. Rucci has an easily recognizable voice, makes nearly anything sound cool and has an earnestness that forces a listener to feel his pain. "Get The Strap," his biggest song on the album (and of his career with more than 5 million Spotify streams) is a playful jaunt with Shoreline Mafia, and his appeal is clear. But he also has tracks like "Rags to Riches" with RJMrLA, on which he honestly raps about his father, finding success through tough times and persevering. That duality will once again show on Rucci's upcoming album, Midget.

XXL spoke to Rucci on the phone shortly before the release of Midget on Oct. 2 to discuss his standout moments and his vision for the future. Get to know this West Coast rising rapper in this week's edition of The Break.

I grew up listening to: "Bone Thugs-N-Harmony, Spice 1. When I got to high school? Lil Boosie. Gucci [Mane] and Jeezy had a lot of street-quality music at the time, but they was going mainstream, and he wasn't. I adored that about him, how he stayed relevant without going mainstream at that time. All the bullshit that was going on with him."

I’m going to blow up because: "All the shit I been through, and all the shit I go through on a day-to-day basis and how I keep smiling, and how I get through it. I take care of everything around me with no fuckin' problem. I know God got something good in store for me. I just know I'ma be something big. I always been somebody in this world. I understood what clout was early. I didn't wanna be nobody like that. I knew I wasn't that person who would like get your attention off of one move. You would have to really pay attention to where I came from and what I go through to really like me. I just know I'ma be big. I just keep that composure everywhere I go."

What’s your most slept-on song, and why?: "'Me and My Drugs.' It s a single I dropped recently. It's a sample from the rock band Skid Row. And I flipped it, and I made it like a song about drugs, and it's super amazing. I ain't been able to perform since I dropped it, and it's a thick-ass anthem. I know they gon' love it. Because of the timing, the corona[virus] shit, we didn't get to promote it or even market it any type of way that we really wanted to. We wanted to do a colossal video, where it's a lot of names in the industry right now. I got a lotta connections with people in the industry, but I don't fuck with ’em on no rap shit; them my friends."

My standout records to date have been: "'Get The Strap' with Shoreline [Mafia] or 'Light It Up' with [Az]Chike. My homies from Shoreline Mafia is the hottest shit on the West Coast, and then they got Rucci, which is the hottest thing on the streets in the West Coast. So, it just went together. Everybody know about me and the streets. I love the streets. I sell out shows every time in L.A. because of the streets. It's artists from L.A. that got these big-ass, fat-ass deals, got fuckin' 500,000 followers [on social media] and they cant sell out a show at The Roxy. I'm doing that with 40K-50K followers. I got a core-ass fan base. They really down."

My standout moments to date have been: "That whole lil run I did [last summer], I sold out The Roxy, then I sold out the El Rey Theatre, then I sold out The Observatory, and right after that, ScHoolboy Q bought me out at The Forum. I lit that muthafucker up. I think it's the performing that be like the biggest stepping stone ’cause people really get to see Rucci. I love performing."

Most people don’t know: "I'm hella nice. They be thinking I'm on some crazy shit because of my face tats and where I came from. I'm super nice and giving. I love people. The people around me know, but I only smoke out of bowl."

I’m going to be the next: "Nipsey Hussle on the West Coast, but the Blood version. I love Nipsey Hussle though. That's somebody who really drove me crazy when he dropped somethin'. Every time I make music, I tell my people, 'If we gon' make an album, it gotta be like a Nipsey project,' ’cause I'm not doing no rah-rah, regular West Coast turnt-up shit. That ain't gonna get you far."

"Light It Up" featuring AzChike

"Get The Strap" featuring Shoreline Mafia