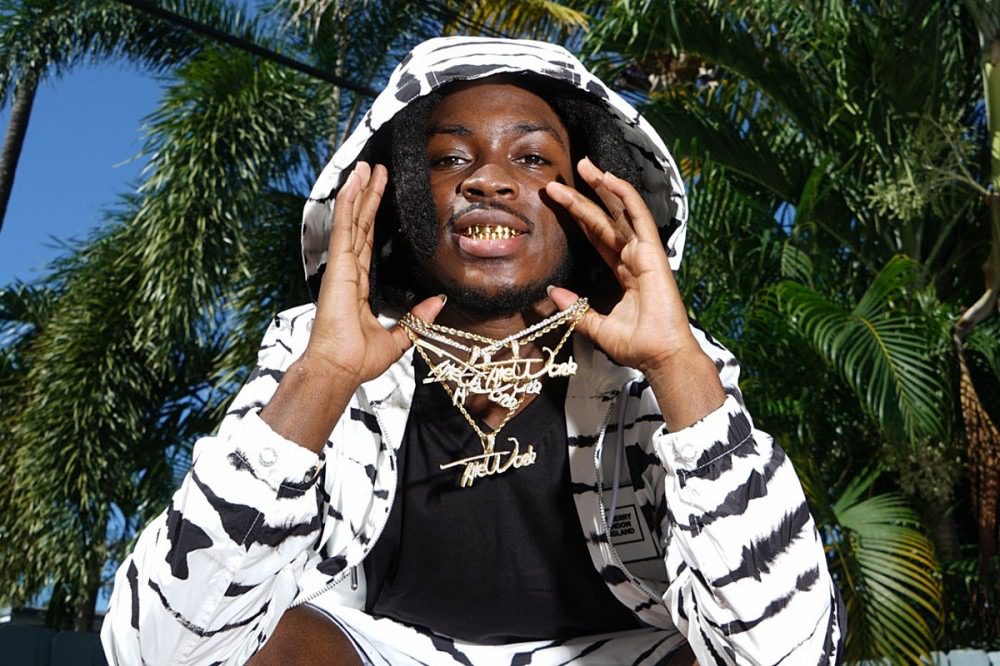 LPB Poody jumped into rap like a lot of young kids do: by freestyling at the lunch table in school. His journey after those fourth grade freestyle sessions was anything but ordinary. The West Orlando, Fla. rapper, now known for his TikTok-fueled streaming hit "Address It," dealt with run-ins with the law and legal trouble while he was still a minor, which interrupted his calling to the booth.

After making and releasing his first song when he was 12, Poody, born Robert Lee Perry Jr., was in and out of juvenile detention and jail from 13 to 18 years old, facing charges for breaking and entering to burglary. Since then, he's been arrested for burglary and resisting arrest in 2017, and carrying a concealed firearm and violation of probation earlier this year. He picked up rap for real in jail, and when he gained his freedom after serving time in 2016, he fully committed to the music.

Part of an Orlando rap renaissance with close friend Hotboii and 9lokknine (who he would later have a fallout with), Poody kept building his name up over the years, dropping his two projects, 2018's Streetz Callin' and 2019's Solitary Konfinement, to build momentum. After a local beef with 9lokknine started to pick up in 2019, Poody released "Address It," a Stxnk-produced diss aimed at his former friend, last year. "Bitch I got it off the muscle/You wanna fight, I wanna tussle," he raps.

The song, which has become his biggest hit yet, took its time to build up over the ensuing months. Once it hit TikTok in April, after a fan uploaded the track, "Address It" quickly grabbed 31,000 video creations at that time (and got a crazy bump once pop star Jason Derulo went viral dancing to it). Poody's song was everywhere.

But even with this success, trouble still loomed. Poody was shot in April of this year, in a drive-by shooting that claimed the life of one of his friends. Continuing to persevere through that is difficult, but Poody stuck to the path. "Address It" is racking up millions in plays and streams. The track currently sits at 24 million Spotify streams, while the initial YouTube player for the song has over 8 million views and its accompanying music video rests at over 2 million and counting. Now Poody has parlayed his energy into a deal with Interscope Records. His latest song, "Connected" featuring 42 Dugg, is starting to pick up, and he has more music ready to go.

Catch up with LPB Poody in this week's edition of The Break.

I grew up listening to: "Lil Wayne, Lil Boosie—that was my favorite two artists when I was growing up. Listened to Gucci Mane, that's about it. But up to now, I listen to Drake sometimes and started fuckin' with Meek Mill when I first heard about him. I did a freestyle to one of his beats ['Save Me'] and that touched a couple hundred thousand on Facebook."

My style’s been compared to: "Kodak [Black], the way I rap. Some people say I be in my Carter mode. I sound like Lil Wayne sometimes. That's who I kinda look up to though. I fuck with Wayne."

I’m going to blow up because: "Rapping, it's kinda easy. I taught myself to rap by reading Dr. Seuss; he be rhyming and shit. So, as I'm growing up, my vocabulary got bigger. So, I just learned to put the words together. I feel like I can be top five greatest ever. I be listening to a lot of rappers and I be like, 'What they be sayin?' It don't be making sense to me. They be so big, so, it's kinda confusing. Do [the fans] want real rap or do they want play-play shit? But then again, my freestyles when I be playin', they fuck with that more."

What’s your most slept-on song, and why?: "I got a lot of music. I gotta go back sometimes. 'Kill The Beat' was my hardest song. That was my favorite song before 'Address It.' 'Kill The Beat' still did its thing, but I feel like a lotta people ain't fuck with it. But that was my first song to touch a mill, but I feel like it was supposed to went bigger than what it did. My homeboys though, 'Bruh, this not the one.' I was like, 'Y'all sleep. Y'all don't hear them bars in there?'"

My standout records to date have been: "Right now, 'Address It.' I'm tryna get back in the loop, I gotta stay consistent. I sat on the spot for a lil minute. Since 'Address It,' ['Connected'], that's the first song I came back out with. I had to come back out hard though."

How have things changed since you blew up?: "The way I look at music, it's getting easier a little bit, but then again, it's a bumpy road along the way. You gotta just really be consistent. That's about it."

Most people don’t know: "I played sports. I was a basketball star. I'm just short as hell. I played PG, No. 3. My last year was playing in high school. I won the championship my eighth grade year. I think the state championship. Ninth grade year, I kinda lost it because I was in the streets more."

I’m going to be the next: "Big thang! Hottest thang, whatever you wanna say!"