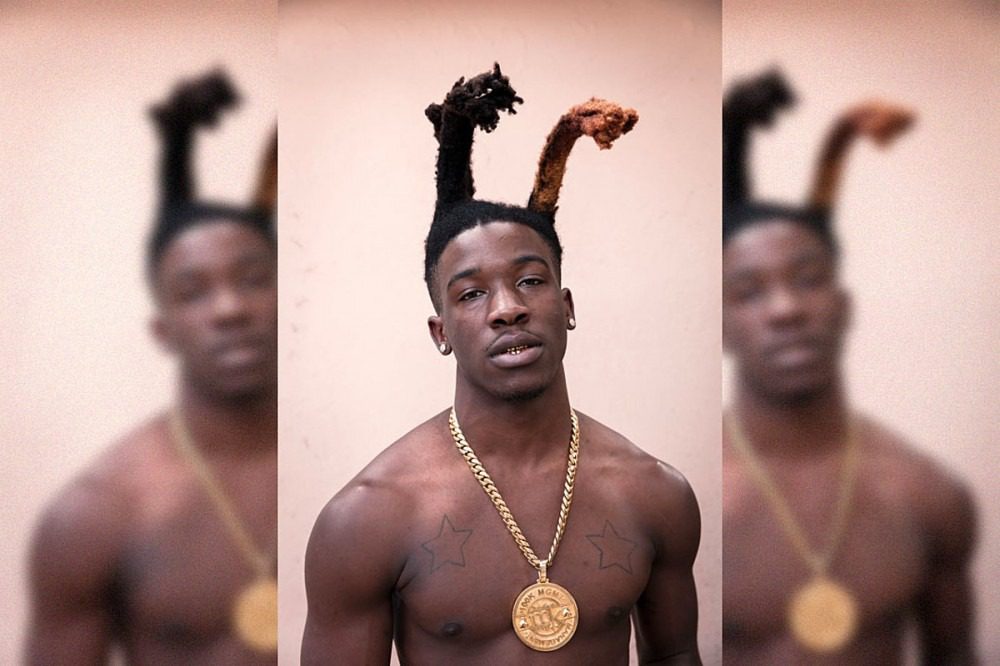 The right path will reveal itself to an artist, no matter what they're going through. At just 7 years old, Orlando, Fla. rapper Hotboii was already rapping. His mother took note of his natural interest in music at such a young age. While he was just a kid with talent at that time, Hotboii, born Javarri Walker, didn't release his music until eight years later when he was 15.

Once he started dropping music, he caught some local buzz around his high school with his song "Switcharoo." At that same time, the then-aspiring rapper was starting to take more risks in the streets, stealing iPhones from people then escalating to breaking and entering. As a result, Hotboii found himself in trouble with the law, and was arrested and charged with criminal mischief for the latter crime. Since he was forced to spend two years in a juvenile detention program in 2016, Hotboii honed his songwriting talent while serving his time.

In 2018, he was a free man at 18 years old. Hotboii was trying to get back on his feet, but he also faced questions from his friends asking when would he get back to music—something the rapper wasn't fully interested in at the time. A year later, he dropped the 2019 song "YG's," a detailed walk through Hotboii's experiences and survival tactics in the street. The track has a unique bounce to it, and Hotboii's flow and touch on the hook sell the song. "Sometimes I feel like the only thing that could heal me is the bag, done fell in love with cash," he rhymes. The song's accompanying video has nearly 2 million views now, but it would pale in comparison to Hotboii's true breakout track, the somber "Don't Need Time."

Released in April and dedicated to his fallen friend Wolph, the piano-driven song, which has a slower pace than his previous work, shows another side of Hotboii, one that's more self-reflective as he questions the loss. "How my Z die? Thought real niggas never die/Gotta sleep tight ’cause people ain't waking up now/I know my nigga made it to heaven, I know it/Wish I could call his phone and tell him how it's going," Hotboii raps on the K Hendrix and LilHBeats-produced "Don't Need Time." He's already locked in over 9 million streams of the track on Spotify.

The accompanying visual has been viewed over 24 million times, and now has a remix with Lil Baby. In the video for the "Don't Need Time (Remix)," Hotboii also pays homage to his friend Salaythis Melvin, who was gunned down police outside of a mall in Orlando on Aug. 7.

Now, the rising artist is still releasing videos from his debut project, Kut Da Fan On, released in May, and he's gearing up for the next step, which is his debut album, to arrive in the coming months via Rebel Music Group, to which he's signed.

Hotboii speaks to XXL on the phone to fill us in on where he is and where he's going.

I grew up listening to: "Kodak [Black]. He a Florida boy, and there was stuff that he was saying that I could relate to."

My style’s been compared to: "Kodak, of course. Lil Baby. Really not too much people though."

I’m going to blow up because: "I don't know, but that's my goal. It's happening already though. I just need the right stuff around me, the right people around me. There's more I gotta do."

What’s your most slept-on song, and why?: "'Vision Clearer,' but that's an old song, like a year ago. 'Gram House Blues,' off my last project [Kut Da Fan On].  I dunno [why it got slept on], I really like that song though. That's a raw song."

My standout records to date have been: "'Dont Need Time,' 'Goat Talk,' 'Me, Myself and I,' 'Anonymous.' I didn't know 'Me, Myself and I' was gonna crazy though. I ain't like that song at all. And that ended up being one of the main ones."

My standout moments to date have been: "Rolling Loud [the livestream]. That was important to me because I never did nothing like that. It was fun, too. I felt like a celebrity."

Most people don’t know: "I'm left-handed. I love math. I'm obsessed with math. Ever since school. If I could have math for four periods out of seven, I'd do that. Everybody who I tell that, they be like 'How you like math?'"

I’m going to be the next: "Best rapper in the world."