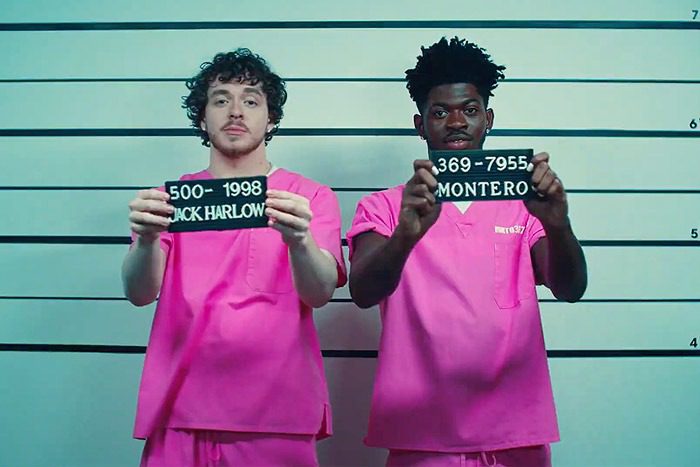 The triumphant track, co-produced by Take A Daytrip and Kanye West, finds the 22-year-old rapper addressing his critics who labeled him a one-hit wonder. “And this one is for the champions / I ain’t lost since I began / Funny how you said it was the end / Then I went did it again,” raps Nas, who has two No. 1 hits on the Hot 100.

The openly gay rapper also addresses his sexuality: “I don’t f**k bitches, I’m queer / But these ni**as bitches like Madea.”

Alongside the song, he has debuted an epic video, which takes place after he is sentenced to five years in Montero State Prison for his Nike Satan shoes lawsuit. But Nas makes the most of it while he plots his escape, passing his time by polishing his Grammys and working out. He and his fellow inmates dance naked in the shower in one provocative scene, while Jack Harlow gets electrocuted by Nas.

“I already knew this song was going to be very much a rap heavy song,” Nas told Apple Music. “And I felt like I knew who’s going to listen to this. So let me make sure I’m doubling down because a lot of people have been saying, ‘Oh, well I like his music, but he’s sus sometimes.’ It was like, ‘No,’ like this is literally… This is me. This is me moving forward. That wasn’t a moment. I’m not really trying to make sure any audience that’s listening to my music is comfortable. I am going to do me.”

“Industry Baby” follows the chart-topping hit “MONTERO (Call Me by Your Name)” and “Sun Goes Down” from Nas’ upcoming debut album Montero, due later this summer.