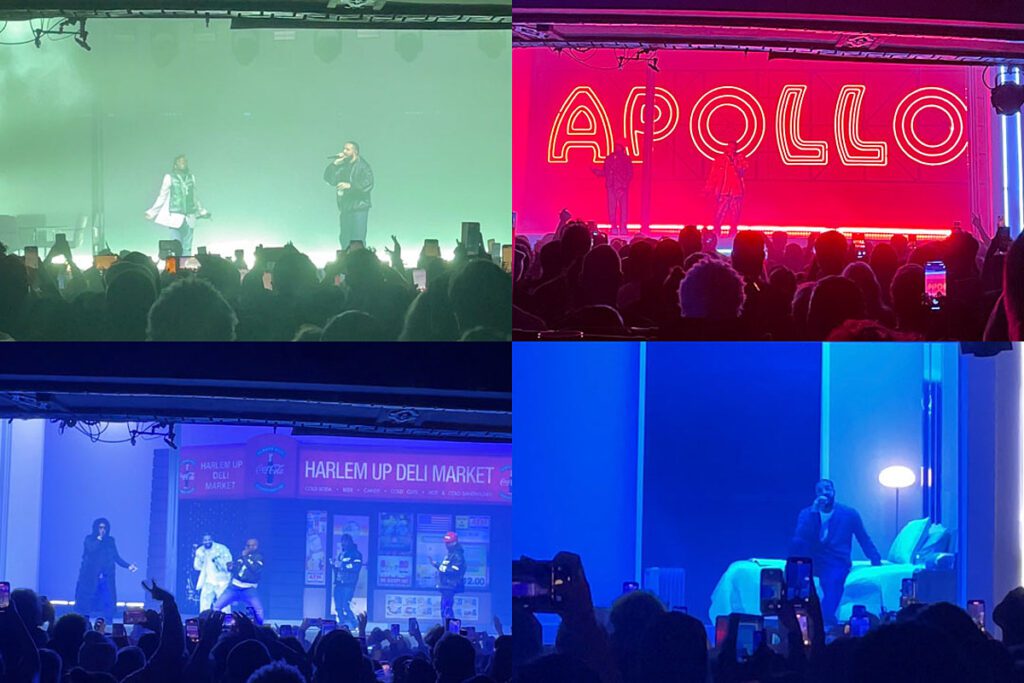 Drake brought the gratitude and b-sides along with surprise performances from Lil Uzi Vert, 21 Savage and Dipset during his second and final performance at the Apollo Theater in New York City last night.

Twenty minutes after 9 p.m. on Sunday evening (Jan. 22), Drake stepped out in a cardigan and his signature braids as he kicked off the SiriusXM and Sound 42 show with “Over My Dead Body.” He sat on a bed made to represent the years he spent in his mother’s basement toiling away at his dream of being an artist. The Toronto rapper was in his feelings—in all the good ways—for the last show of his two-night run.

“I’d like to welcome you to night two of the Apollo, legendary Apollo in Harlem, New York City,” Drake said as he saluted the crowd, which came out in droves despite a two-month postponement and pouring rain. “This’ll be our last show in New York for a lil bit, so I see they brought me the right crowd for the last show. I can already tell we ’bout to take the energy up tonight. I got some new surprises for you tonight. You see, I put the whole cardigan on for you today. As I said last night, I think I spend a lot of time in competition mode and I end up being taken by that mentality—my psyche, if you would say. Sometimes I’m in a mode of tryna, you know, represent for all you beautiful people that support me. I wanna make sure that like, that I’m not letting you down. So, I feel like I get into this mode of competitive spirit. So tonight, I just wanted to leave that alone for a second and I wanted tonight to be about gratitude, ’cause I’m so grateful for all of you.”

“And I think it’s kinda finally setting in, it might just be I’m getting older, I don’t wanna say old, I just said older, but I think it’s just the fact that, you know, I’ve had a lot of days as of late where I just, I can’t believe it when I wake up any of you really still care about what I have to say or what I make. And it means the world to me that you continue to listen and you continue to sing songs with me and give me feedback and you know support this group we have from Toronto, Canada. All my dearest friends are here.”

“And this set is meant to represent my mother’s basement where I used to spend a lot of my time dreaming about this shit, you know, listening to like Hot 97 on the radio stream or watching 106 & Park and shit, thinking that I could be Bow Wizzle or B2K or some shit like that. You know, my No. 1 supporter, my mom, is sitting up there right now. Shine a light on her, she’s got a mink hat on tonight. She looks incredible. So yeah, to my dear mother, you know, I think the best way I could sum this up is I’d like to pay tribute and respect to all the times that you never told me no. You never told me no if I said I could do something or I said I could be something, you never told me no. That means the world to me. So tonight, I’d like to take you on a journey of some of the songs that I probably would’ve never made if I didn’t have somebody to tell me that I could do it all the time so here we go.”

From there, Drake performed nearly 40 songs, including plenty of his hits—no misses. There were the fan-favorite b-sides, too. “Marvin’s Room,” “Trust Issues,” “Practice,” “Jungle,” “Best I Ever Had,” “Over,” “Headlines,” “HYFR,” “No New Friends,” “Energy,” “Know Yourself” and “Nonstop,” among many others.

Drake revealed during a stage design switch reflecting an office space that early on in his aspiring artist grind that he got flown out to New York in his pursuit of a rap career. However, the trip didn’t lead to a deal and Drizzy was rejected by several labels for a week straight. Their refusal to let him sign the dotted line didn’t deter the OVO leader since he went back to his mother’s basement in Canada to write more songs.

“Hold On We’re Going Home,” “Controlla,” “One Dance,” “In My Feelings” and “Passionfruit” came next. Then the night’s first surprise: Lil Uzi Vert. The Philadelphia rhymer brought his current Jersey club-inspired smash “Just Wanna Rock” to the stage, dance moves and all. “XO Tour Liif3” got play as well.

“Like I said this is a family show,” Drake affirmed with Uzi on the stage beside him. “Make some noise for my actual real-life brother. He goes by the name of Lil Uzi Vert. I love this guy so much. Before you go, I just wanna say, 21 said some real nice shit last night, but I gotta echo the same sentiment about this guy. This guy right here, like anytime in life ,anytime I feel down or whatever it is, I always get a message from him checking in. Never asking for nothing, just checking. So I just wanna let you know, if you ever wanna do well and go far in life, you gotta check on your people. Not only are you one of the greatest artists of this time, I’m so excited to exist at the same time as you. How experimental you get, how genius you are. But this guy checks up on me. He’s a fuckin. real one.”

Then it was on to “Way 2 Sexy,” “Wait for U,” “Massive,” “Calling My Name” and “Sticky” before Dipset graced the stage. Cam’ron, Jim Jones, Juelz Santana and Freekey Zekey walked out the door of a bodega-designed set decorated with a Big L mural and moved through classics like “I Really Mean It” and “Hey Ma.”

The last guest of the night was 21 Savage, whose entrance onstage at 10:38 p.m. was impeded as he walked out to perform “Rich Flex.” Apparently something or someone fell according to rumors in the crowd. Drake stopped the show and the house lights went up. No confirmation was given as to exactly what happened, but at 10:56 p.m., an announcer got on the mic to inform the crowd that no one was hurt and the show would go on. After Drake’s show, video circulating on the internet confirmed someone fell from the first floor balcony.

21 Savage and Drake continued on with “Rich Flex” and followed up with “Privileged Rappers” from their joint album Her Loss. “First off, glad that everybody’s OK,” Drake maintained. After he further praised 21, “Spin Bout You,” “Jimmy Cooks” and “Knife Talk” got all the shine.

“So, I was telling him earlier, if you guys feel like it, if you enjoyed that experience, feel free to come see me and my brother this summer,” Drake informed the crowd, teasing their upcoming joint tour.

Harlem welcomed the Boy with open arms and as he rhymes on “Legend,” Drake’s Apollo performance proved he “got this shit mapped out strong.”