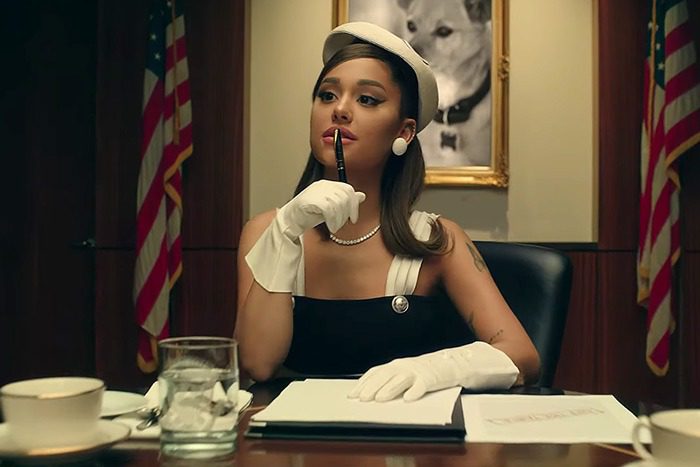 Last week, Ariana Grande surprised fans when she announced that her sixth studio album would arrive before the end of the month. And now she delivers the seductive first single “positions.”

Produced by London On Da Track and Tommy Brown, the empowering anthem finds Ariana in the driver’s seat as she navigates a relationship.

“Switching the positions for you / Cooking in the kitchen and I’m in the bedroom,” she sings. “I’m in the Olympics way I’m jumping through hoops / Know my love infinite, nothing I wouldn’t do.”

In the cinematic video, directed by Dave Meyers, Ariana plays the President of the United States, who does it all. One minute she’s commanding her cabinet, which includes her mother Joan Grande, Victoria Monét, and Tayla Parx, and the next she’s cooking up in the kitchen before retiring to the bedroom. She also switches up her Jackie O.-inspired wardrobe from one stunning look to the next.

Her new album, the follow-up to 2019’s thank u, next, arrives Friday, Oct. 30. There are rumors that it will include a collaboration with Doja Cat. Back in May, Ariana told Apple Music that she was saving it for her next project.

She was also recently on set of a Christmas-related production with Mariah Carey and Jennifer Hudson.