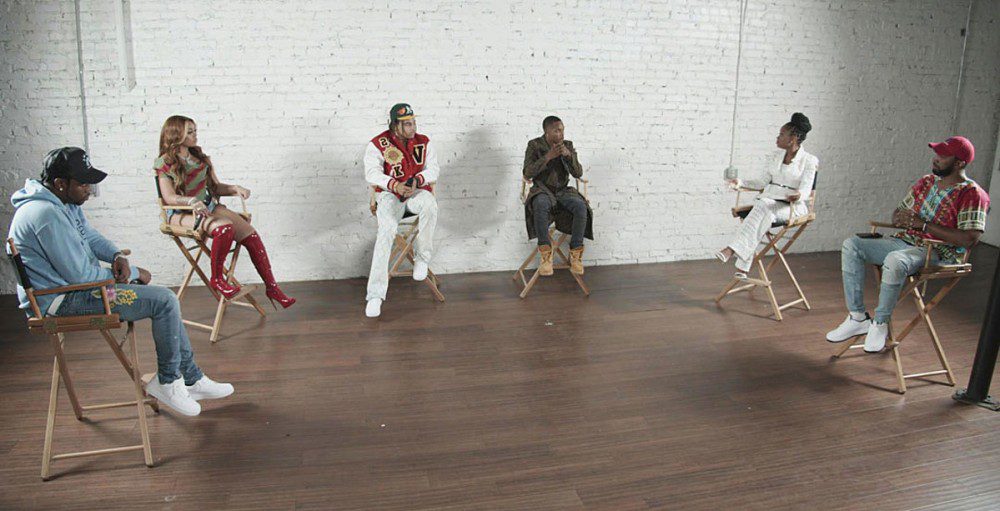 Even in the face of a global pandemic, the issues of race and police brutality have once again taken center stage. Now, the 2020 XXL Freshman Class is shedding light on their own experiences with the police, protesting for justice after the killings of countless Black men and women by cops and how these Freshmen are using their voice to prompt change.

In May, two months after the U.S. implemented a social distancing mandate amid the coronavirus pandemic in March, protests surrounding the deaths of George Floyd, Ahmaud Arbery and Breonna Taylor spread across the country after all three were killed by White men, a majority of them cops. Taylor and Arbery died at the hands of police officers and Arbery was killed after being confronted by a former officer and his son.

Amid the protests, 2020 XXL Freshmen NLE Choppa, Polo G, Calboy, Lil Tjay, Fivio Foreign, Jack Harlow, Rod Wave, Chika, Mulatto, Lil Keed and 24kGoldn were faced with the past and present moments of police brutality and racism in America. For this year's 2020 XXL Freshman shoot, XXL facilitated a roundtable discussion about these topics with Until Freedom, a social justice organization founded by activist Tamika D. Mallory last year. Fellow members include rapper-activist Mysonne Linen, actisit-lawyer Angelo Pinto and activist Linda Sarsour, who joined Mallory and the XXL Freshmen for A Fresh View on Racism, Politics and Social Justice roundtable. This conversation, which was preceded by Part 1 – The Past on Sept. 16, surrounds the conversation of The Present, and what the Freshman Class is doing to make their voice heard.

As social media timelines are flooded with images of racism and an innumerable amount of ideas surrounding how to deal with it, there doesn't seem to be a linear path to justice and equality—and if there is, it's unclear who's guiding the youth in that direction. "Even though everybody is feeling the same way, ain't nobody listening to the leader. Who is the leader?" Calboy asks during the conversation. According to Mysonne, a rapper himself, that's where hip-hop artists can come in.

"You guys have the ability to tell the truth all the time," Mysonne suggests. "Whether you say something once a week, once a day, in a song, you send a tweet out, whatever it is that you do that you know that you saying something or doing something that make a difference."

Polo G understands the power of his voice to help enact change when it comes to his fans. "If you a voice or a big-time rapper, even if you known on a smaller scale and you just local, you still got people looking up to you or really paying attention to what it is you gotta," the Chicago native says, affirming his own duty to speak on the issues. "I feel like messages in music, making sure you the influence towards change in music."

While any responsible history teacher will teach students about the harm of systemic racism and America's role in it, to those who don't have to live with the consequences of the system, the idea is a foreign one.

"That's why we speaking up," Mulatto affirms. "Other communities, they don't have that instilled in them. We was born woke, that's where we live. That's the community we live in."

One of the intricacies that comes with the lives of Black and Brown people is the idea of police brutality. The events that preceded the newest wave of protests began surfacing on the national level this past May. On May 11, footage of 25-year-old Ahmaud Arbery being shot and killed in a suburban Georgia community surfaced on the internet. The shooting took place on Feb. 23, but the men who pursued Arbery, a White ex-cop and his son, who killed Arbery, were only arrested after a lawyer posted the video online in May.

Two weeks later, 46-year-old George Floyd died in police custody on May 25, after an officer knelt on Floyd's neck for eight minutes. In video of the incident, which quickly went viral, Floyd says he can't breathe. A couple days later, on May 28, hundred of protesters gathered outside in Louisville, Ky. to demand justice for 26-year-old EMT Breonna Taylor, a Black woman who was shot and killed on March 13 when police obtained a no-knock warrant to search her Kentucky home. She died after being shot eight times after her boyfriend allegedly fired shots at an officer.

Following the deaths of Floyd, Arbery and Taylor becoming national news, folks across the country, including people like Mulatto, hit the streets to protest. "I was out there in Atlanta, frontline, running from rubber bullets and tear gas," she offers.

San Francisco artist 24kGoldn was also out there protesting, and he had a similar experience. "I was out there in Santa Monica and L.A.," he recalls. "It's crazy. We were protesting very peaceful and they were just throwing tear gas."

Rod Wave and NLE Choppa witnessed firsthand what was going on with the protests as they unfolded, from the looting to the massive turnouts. "It's so many small businesses in my city, it's a rap for them, ’cause first [it's] the coronavirus, they had to shut it down," Rod says. "Then here come the riots, we looting and burning all that shit down. Them people went back north, went back home."

"Man, you go outside, you look down in the street, it look like zombies, man," NLE Choppa remembers. "It's so many bodies, bruh. Everybody just going. They at it. It's like that. Like the intensity up."

When they're not in the streets, rappers are also using social media to make their voice heard. For 24kGoldn, that's a mission worth completing.

"This is some shit I really believe in," he discloses. "This affects all of us. Why not take that extra five seconds to post something on your Instagram and have 100,000 people see it and say, 'Oh shit, maybe he's saying something right."

For his part, Bronx, N.Y. artist Lil Tjay recognizes the influence he's been imbued with as a rap star with a large online following. "I know that if I was to just say like, go on the internet and just be like, 'Yo, I only smoke Backwoods,' I know it's a good people in this world that's gon' change their life to only smoke Backwoods because they want, feel me, to be like a rapper," he says.

Parlaying social media outreach and fandom to legit activism—or at least understanding—can be one goal for rap stars everywhere. Harlow, who protested in his hometown of Louisville, Ky. with fellow Louisville artist Bryson Tiller to raise awareness for the Breonna Taylor case, feels he can use his position as a White rapper to help his White fans understand the plight of Black people in America."

"If I have some influence over some White kids, and they have parents that tell them, 'It's All Lives Matter' and all that, I feel like I can influence a lot of White kids to see things a little more clearly and have empathy," Harlow expresses.

"Folks gon' say whatever about you," Lil Keed says. "If I'm worried about what you say, that means I'm not doing what I'm supposed to be doing."

As folks across the world show their support for Black Lives Matter and the fight against systemic oppression, social justice tags and other woke signifiers have permeated the web. While trends might evaporate, the mission can't.

For now, Freshmen and folks across the country are using conversations like this one, their social media platforms and just about anything else they can to apply the pressure and make a difference.

"I think in what I share, what I do, what I donate, when I literally put my body out there in the midst of a global pandemic, yeah, fuck yeah, I'm furthering the conversation," says Chika, who was detained by police at a protest a few months ago. "And I'm gonna continue to because we gotta keep talking about it until something is done."

Watch Until Freedom discuss the present state as it relates to protests, police brutality and using your voice with the 2020 XXL Freshman below.