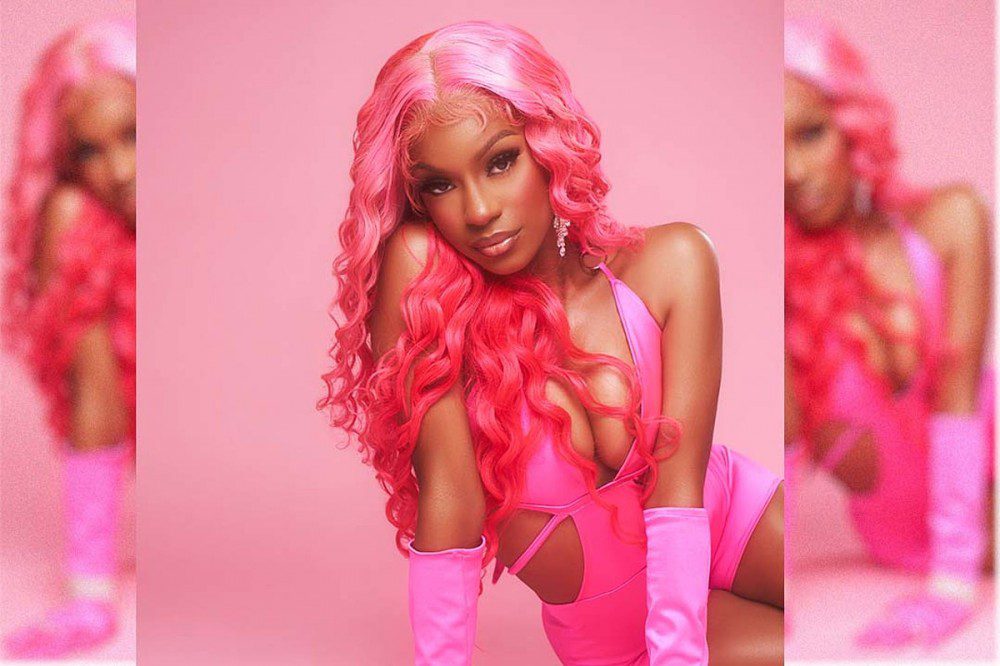 There's a positive side to releasing music to the internet on a whim. That first wave of support can start a surging career, as is the case for Houston rapper Monaleo. The 20-year-old artist kicked in hip-hop's door with the viral song "Beating Down Yo Block" earlier this year. "I don't fuck with bitches, we not friends and we not pals/Beating down yo' block, taking niggas from they gals," she raps.

Monaleo didn't set out to be a rapper; she grew up singing at church and in her school choir, but dropped her first verse at the urging of her younger brother, a rapper named Yung Rampage. She took him to the studio in December of 2019, for his 15th birthday, and he asked his big sis to rap on his song "Family Ties." Monaleo dropped the finished track on Instagram and got a lot of love for it, then began to intermittently work on music from January of 2020 onward.

Late last year is when Merion Krazy, the producer of "Beating Down Yo Block," first sent the young Houston rapper the beat for the song; Monaleo recorded over it and they both felt great about the final product. She posted the song's snippet on Instagram in September of 2020, which went viral there and on Twitter. Unfortunately, Monaleo knew she couldn't officially drop it due to the song sampling Yungstar's "Knockin Pictures Off Da Wall," an important track within Houston hip-hop. After months of negotiation—the song going viral in January of this year helped—the sample was cleared, and it was off to the races.

The track finds Monaleo rhyming about taking men from other women, fights around the way and refusing to be taken advantage of. Her edge, clever lines—she compares passing men around to tossing beanbags—and confidence helped give the song traction. "Beating Down Yo Block" has 3 million Spotify streams, and the video is climbing past 3.3 million YouTube views. Both gave Monaleo's next two songs, "Girls Outside" and "Suck It Up," more ears in her direction.

Now represented by the Stomp Down collective that also reps hometown hero Maxo Kream, Monaleo has continued to keep her momentum going while dropping more music. This past August, she appeared in Beyoncé's new Ivy Park campaign, receiving praise from fellow rappers Rapsody and Texas-bred Asian Doll. She's also been candid about her experiences with suicide attempts in the past, sharing her journey to having a "sound mind" these days with her social media following.

The rising rap newcomer has another new track coming this month, which she considers her best and most sentimental song yet. Monaleo is basking in her new life, a far cry from her call center operator job she had just a few months ago. Get to know her in XXL's The Break.

I grew up listening to: "Lil Wayne, a lot of old-school R&B music, Brian McKnight, a lot of gospel music, Tasha Cobb. [My first favorite rapper] was Nicki [Minaj]. She was different. At the time, I was 8 or 9, give or take. She was just everything that I wanted to be. She had pink cars, used to talk about being a Barbie, and I used to love Barbies. She was just everything that I loved, packaged up into one."

My style’s been compared to: "I don't really pay attention to shit like that, to be completely honest. Maybe, if I were to go through the YouTube comments, depending upon the song, different songs, people will be commenting and say like, 'Oh, you sound like Asian Doll' or, 'You sound like…' It really varies from song to song. I don't have songs out that sound like each other. I'm not bothered by the comparison at all. I'm very supportive of all of the female rappers that I'm coming up with at this time."

I’m going to blow up because: "Every day it's something different. This is a sign. This phone call is a sign. Tomorrow I might wake up to a DM from somebody who I really love and adore and that'll be a sign, or I might drop a song and just get a really good response and then that'll be a sign. Or, I could be in the car, for example, the other day I was in the car and I was listening to this song that I'm getting ready to put out this month, and I was driving, and it was like 3 o'clock in the morning, and then I see, what looks like a shooting star, which is crazy. I've never seen anything like that. That for me was just confirmation that this is something that I should be doing."

What’s your most slept-on song, and why?: "It's super early on. I decided not to pay attention to things like that, because it's going to drive me up a wall. I saw that when I put out 'Girls Outside,' people were super adamant about me putting a song out, then I put it out and people were really critical of the song, and it drove me up a wall. I decided right then and there that I will never worry myself with shit like that ever again. If people like my music, they like it and I'm appreciative of that, and if they don't, then it's OK."

My standout records to date have been: "['Beating Down Yo Block']. I think it was just really relatable. And, I feel like people could feel the energy, the energy really did translate through that song. And, I think it was just something that, women specifically, could relate to. It was a song that made women feel good, it made women feel powerful, it just made feel dominant. And, even with men, when they reach out to me, they say like,' I really fucked with the song. You are really rapping on this song.' And, they're just saying that they missed real rap.

"I'm actually not sure what that even means to be honest, but they just are saying, 'We missed real rap' or whatever the hell. I just was working at a call center, earlier this year, so I have a hard time wrapping my head around the fact that people perceive me as a rap artist. That shit is just so fucking bizarre. I think I'm just grateful that this is the situation because it could have been a totally different story. Whatever comes with this, I'll take it, I'll take it."

My standout moments to date have been: "The biggest moment of my career was probably working with Beyoncé for the Ivy Park campaign. That was definitely the biggest moment in my career by far. It was a very surreal experience, an entire day. By the time I had finished shooting with her, at the end of the day, because we shot for like maybe eight or nine hours, by the time I had finished, I couldn't believe what had just happened. That whole time I just was on cloud nine.

"She's very hard working, she's very diligent and she knows exactly what she wants, and it was really inspiring for me, because she was very hands-on. And, I was really surprised by that, because she has a lot of people on her team that she could easily delegate to do certain tasks, but she is the one who's like, 'Let's do this, let's do that.' She's spearheading her entire camp."

Most people don’t know: "I went to school for mortuary science. Crazy as hell. Craziest shit ever. I wanted to be a funeral director. So, it was going to be one of those things where, basically, I'd go to school for two years and then I would have an Associates [degree] in mortuary science. But, the problem was, I didn't realize the crazy nasty shit I would have to do. I think it was more so just, I was super interested, I was just interested in death in general. It was just a phenomenon that I really couldn't explain to wrap my head around, so, I wanted to kind of delve into it a little bit more, not even realizing what the hell I was getting myself into.

"When I was going to school, it just kind of made me realize my own mortality, and the mortality of the people around me. When you are working on a body and that person is the same age as you, it's like, Wow, this could have easily been me. Or same age as your younger sister or younger brother, this could have easily been them, and that was just eating away at me, and I could not do it, not another day. I remember I woke up, I was like, I'm never going back to that damn school, and I never went back."

"Beating Down Yo Block"

See 20 Ways in Which Rappers Schooled Us About Life

Travis Scott, Kendrick Lamar, Juice Wrld, Pop Smoke and more have taught us quite a few things along the way.