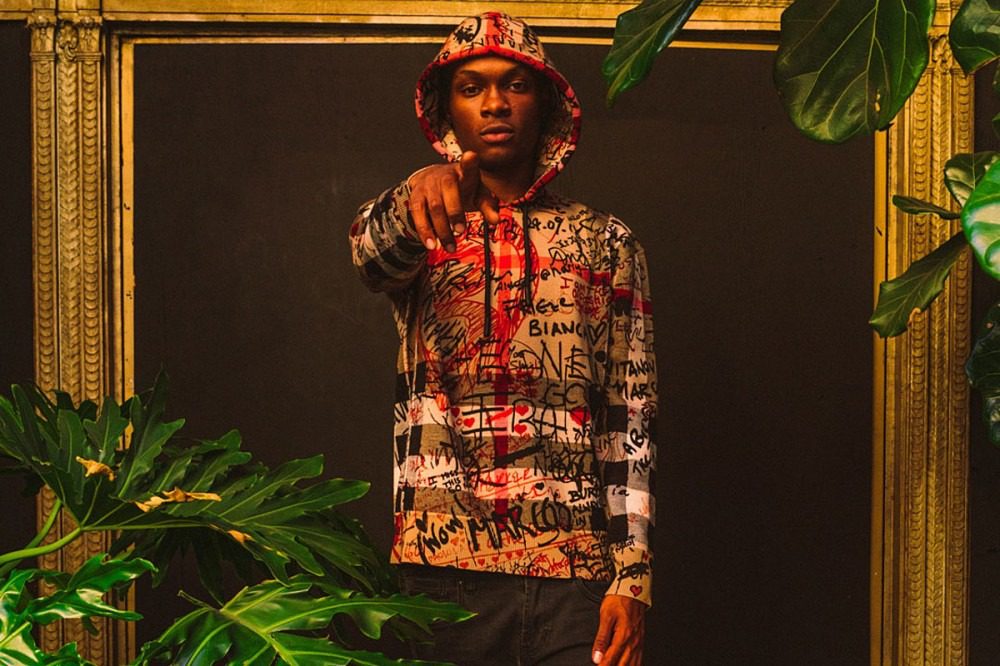 If an artist has a vision for themself, they have to see it through. Such is the case for Chicago rapper Lil Eazzyy. At 18, he's beginning to live out his dreams, tasting early rap success and garnering national recognition plus major label attention with his song "Onna Come Up."

Already streamed over 16 million times on Spotify thanks to its placement on RapCaviar and Most Necessary playlists, the Hugo Black-produced "Onna Come Up" features a no-hook showcase of bars centered on Eazzyy's ride to the top. The track, which was originally a freestyle, and released at the urging of his manager, began making noise online within a month of its arrival in May.

"Right now, on a come up/Lately been talkin' my shit because I know I come from the gutters/Send shots at ya brotha/Then I go pop out in all of this linen like I was a butler/How can you hate me? I'm comin' from under/Nowhere to sleep, what the fuck is a cover?/Now I pop out in Balencis, they runners," he raps over an ominous beat.

"Onna Come Up" has turned a recording he did for fun two years ago into a viable career. On that fateful day in 2018, one of Eazzyy's friends brought him along on a studio run, and it was on from there. Those frequent studio trips with his crew helped Eazzyy build himself from someone who saved rhymes on his phone to an artist who now spends much of his time recording and improving his skills in the booth.

After taking rap seriously for about a year, Eazzyy now has a song that's climbing in popularity. Currently, the rising rhymer is in talks with labels to sign the right deal. Things are changing quickly for Eazzyy, who dropped his newest, guitar-driven banger "Activated" in late October.

Learn more about the Chicago teen in this week's edition of The Break.

I grew up listening to: "I grew up listening to a variety of artists. My dad… he didn't listen to hip-hop. So like, he started me on Maroon 5, The Temptations. When I started getting into rap, I was listening to G Herbo, Chief Keef. I was really a big Chicago rap fan. I wasn't really hip to everything else outside of Chicago. Fredo Santana, Lil Durk. People are versatile [in Chicago]. It's not all people making the same music. Some people making drill, but then you got the Kanyes, the Twistas. It's a lot of different vibes."

My style’s been compared to: "They compare me a lot to Polo G. Just 'cause I like to play with melodies and I like to do the drill stuff at the same time. Polo G and G Herbo are the people I actually look up to. When I hear shit like that, it put me in a mode to wanna go even harder, because y'all comparing me to G.O.A.T.s, you know? Especially, and they from my hometown, and it hit even harder."

I’m going to blow up because: "Truly? I just have faith. I knew if I was gon' do something, I'm putting my all into it. I knew I didn't really wanna go to college. I was good at school, but it was like, I knew four more years of school wasn't really what I wanna do. I like quick cash, I like getting my money. I just felt like why not put the stuff that I do on a daily basis, why wouldn't I put that into music form? ’Cause that's what people like.

What’s your most slept-on song, and why?: "'Letter to Tracy.' It's going crazy right now, but I feel like they did sleep on it when I dropped it before 'Onna Come Up.'"

My standout records to date have been: "['Onna Come Up']. It's kinda like relatable. When you hear it, it puts you in that, 'Yeah, it's time for me to get up and do my shit. I'm on the come up right now.' It puts you in the mood to get up and go be productive. Everybody feel like the underdog until they push theyself. I'm just tryna get people to push theyself and strive for this shit ’cause I did it."

My standout moments to date have been: "Getting out there to L.A. Once I got to L.A., I probably never recorded that many songs in that short of a timespan."

Most people don’t know: "I kinda got my moods. Sometimes I'm off everybody and then sometimes I wanna be low-key and out the way. Another thing, I'm really big into sports. I'm really big into video games. Madden, NBA 2K, UFC. I'm waiting on that new GTA and the new console to come out. I fuck with Fortnite, all the Call of Duties, all the big games right now."

I'm going to be the next: "Big artist out of the Chicago area."