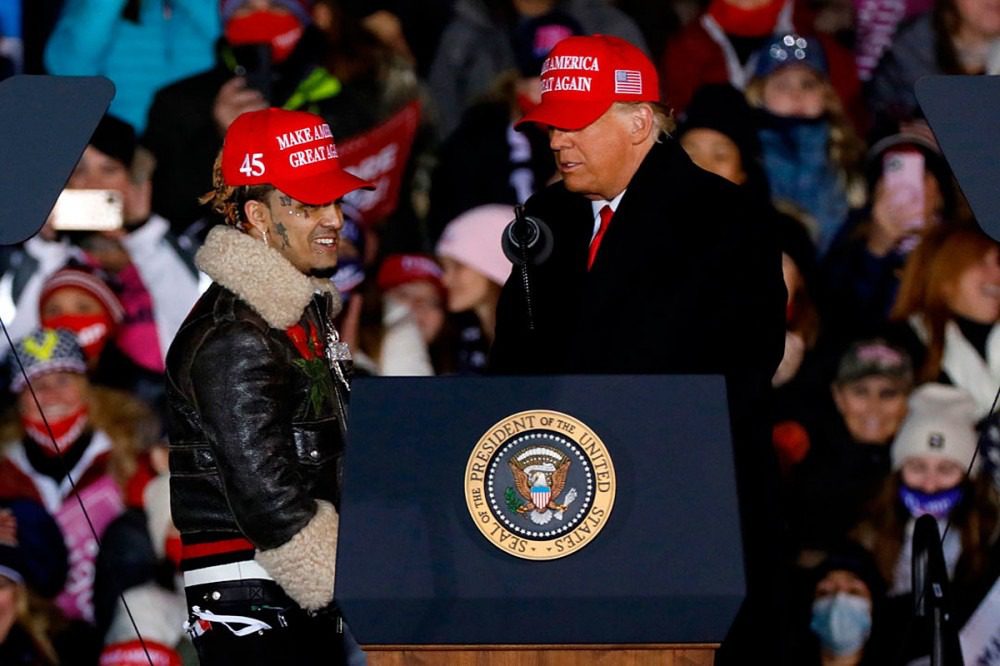 President Donald Trump has blundered the pronunciation of one of the latest rappers to come out in support of him at a campaign rally this week.

During one of Trump's final rallies in Grand Rapids, Mich. yesterday (Nov. 2), he mistakenly referred to Lil Pump as "Little Pimp" when calling the rhymer to the stage.

"And speaking of sound, music and other things, one of the big superstars of the world, Little Pimp," No. 45 said. As Pump approached the stage, the president corrected himself and called the "Gucci Gang" artist by his proper rap name.

Lil Pump, who is donning Trump's signature red Make America Great Again hat, came onto the stage and said to the crowd, "Hello, everybody, how you guys feeling? I come here to say, Mr. President, I appreciate everything you've done for our country. You brought the troops home and you're doing the right thing. MAGA 20, 20, 20, don't forget that. Don't forget that. And, do not vote for sleepy Joe at all."

As the rapper exited the stage, Trump approached the podium again and told the crowd, "That's great. Thank you very much. I appreciate it. That's very nice."

Late last month, Pump went on his Instagram Story and spoke out against Biden following news of the former vice president's proposed tax plan. The plan, which was criticized by 50 Cent as well, would increase local and state taxes for residents in New York State, New York City, California and New Jersey.

Lil Pump also posted a photoshopped image of himself shaking hands with Trump on his IG.

The former 2018 XXL Freshman joins Lil Wayne, Waka Flocka Flame, Asian Doll, BlocBoy JB and a few other rappers who have shown public support for the president this year.

Check out the clip of Donald Trump mispronouncing Lil Pump's name and Pump speaking during his rally below.