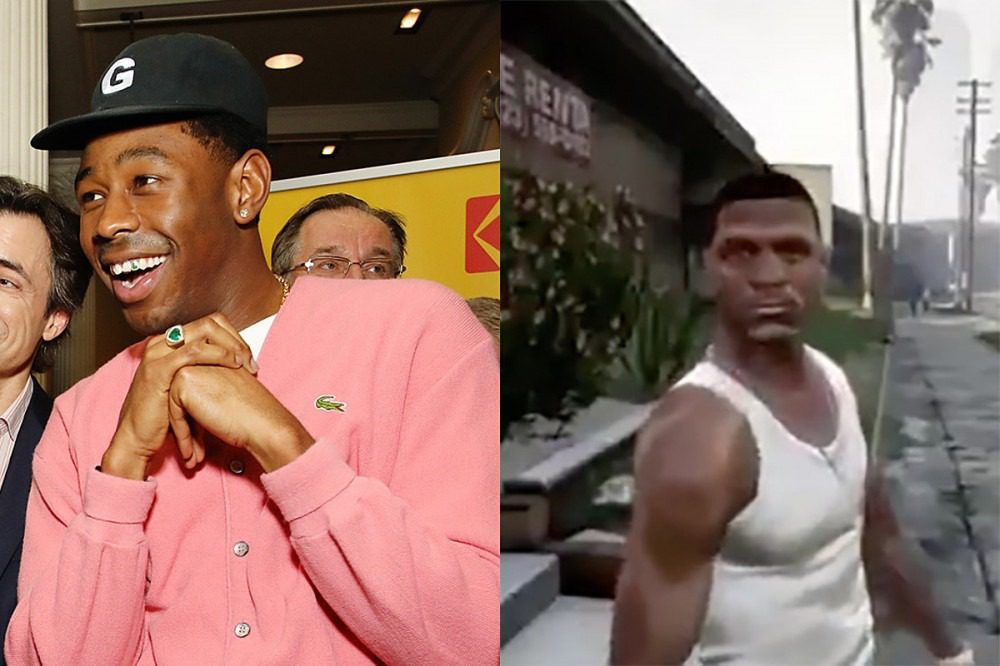 Tyler, The Creator added video game voice talent to his résumé some years back, but it looks like people are just beginning to notice.

On Nov. 28, footage from the nearly 10-year-old Grand Theft Auto V video game began circulating online via an Odd Future fan Twitter page featuring Tyler's voice. In the particular clip, a male voice that isn't the rapper's can be heard saying, "Man, I been getting a gang of bitches lately." Then, Tyler, The Creator's voice, which belongs to another male character wearing a white tank top while holding what appears to be a 40 oz. beer, says, "Damn straight. Aye, you like potato salad? ‘Cause I like potato salad, nigga."

Moments later, Tyler continues, "Aye, I'm sick of these niggas thinking families ain't real, nigga." After the initial male voice tells the California rhymer, "Man, shut up. Man, I'm tired of yo mouth," Tyler replies, "Oh, you want me to beat yo ass, huh?." At that point, a silver gun is brandished and a fight between the two men ensues.

Grand Theft Auto V came out back in September of 2013. However, people are beginning to realize that the former Odd Future member's voice is on the action-adventure video game.

One person tweeted, "Why am I just now finding out Tyler, the creator voiced some random dude in gta v💀💀💀."

Tyler, The Creator actually confirmed in 2013 that he appears in the video game.

The Grand Theft Auto video game series, which is developed by Rockstar North and published by Rockstar Games, first launched in 2008.

Tyler, The Creator isn't the first member of the hip-hop community to be featured in a video game, though. Back in August, it was announced that TDE rapper ScHoolboy Q is a player on the PGA Tour (Professional Golfers' Association Tour) 2K21 video game that dropped on Aug. 21.

See more reactions to folks realizing that Tyler, The Creator is a voice on Grand Theft Auto V below.