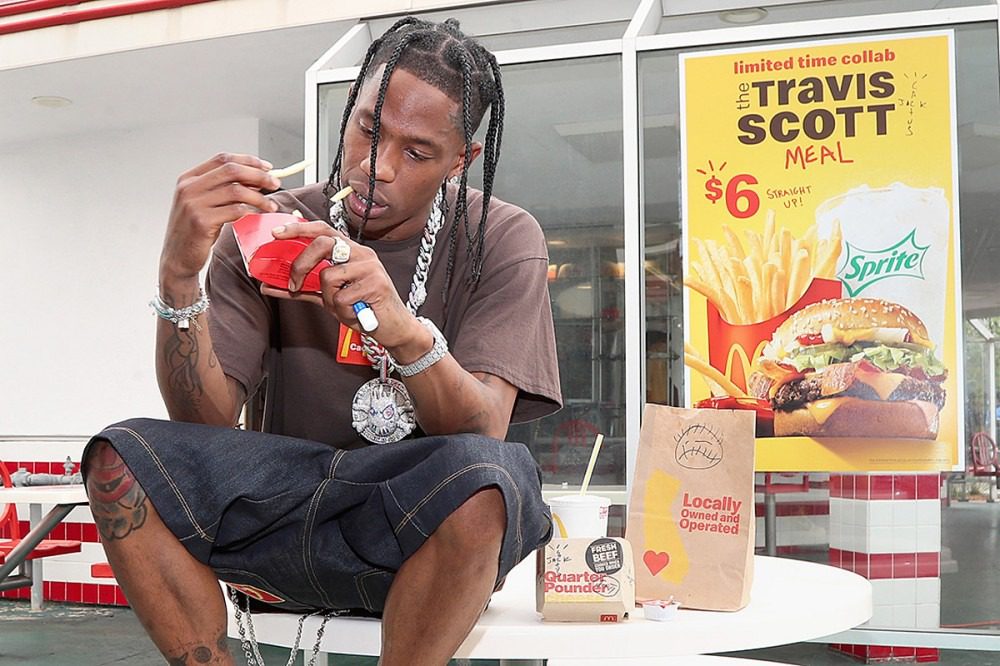 Since McDonald's announced their collaboration with Travis Scott in early September, the fast-food restaurant chain has seen a significant rise in sales. Now, claims have surfaced that Mickey D's is using partnerships, like the one with La Flame, to cover up longstanding issues within the company.

On Thursday (Oct. 8), Vice Media released a new report suggesting McDonald's' recent collaborations with Travis Scott and Latin artist J Balvin were allegedly put in place to thwart racial discrimination lawsuits the company is currently facing. Being that Travis is a Black rapper with a large following in hip-hop, the report alludes to the fact that the collaboration between the rhymer and the fast-food franchise could be used to mask claims of mistreatment by former Black employees, who have taken legal action against the company.

One lawsuit, filed by two former executives in January of 2020, claims that McDonald's "conducted a ruthless purge" of its Black leaders and fostered a "hostile and abusive work environment" for Black executives and franchise owners. Another lawsuit filed in September is comprised of 52 Black franchise owners, who claim to have been subjected to "systematic and covert racial discrimination" since the 1980s, as reported by The Washington Post.

Chin Jou, a senior lecturer in history at the University of Sydney, made a similar claim in September, detailing McDonald's' ongoing racial discrimination issues. In an article published by The Washington Post, Jou explained how McDonald's has allegedly used Black and Brown consumers over the years while simultaneously sabotaging workers of color.

"McDonald's should be in the doghouse when it comes to African Americans right now," said Jou. "This Travis Scott juggernaut has been so successful at obfuscating other McDonald's-related news items."

In response to the claims made against the popular fast-food chain, a rep for McDonald's USA told XXL in a statement this afternoon, "Any claim that McDonald’s collaboration with Travis Scott was launched in response to recent litigation is completely false. We teamed up with Travis—and our newest celebrity partner, J Balvin—because of their love for the McDonald’s brand, their widespread appeal and their loyal following among our younger customers and our crew."

The statement continues, "In regards to the litigation—these allegations fly in the face of everything we stand for as an organization and as a partner to communities and small business owners around the world. Not only do we categorically deny the allegations, but we are confident that the facts will show how committed we are to the diversity and equal opportunity of the McDonald’s System, including across our franchisees, suppliers and employees."

While it's unclear when Travis Scott officially inked the deal with McDonald's, the announcement of the partnership follows public outrage stemming from police brutality and the lives taken at the hands of law enforcement such as George Floyd and Breonna Taylor.

Following those incidents garnering worldwide coverage and the launch of The Show Must Be Paused initiative, a social media-wide blackout that sparked awareness for the fight against injustice across many platforms on June 2, an emphasis has been placed on the demand for equality. Thus, many companies have taken measures to unroot prejudicial issues within their corporations.

XXL has reached out to a rep for Travis Scott for a comment.