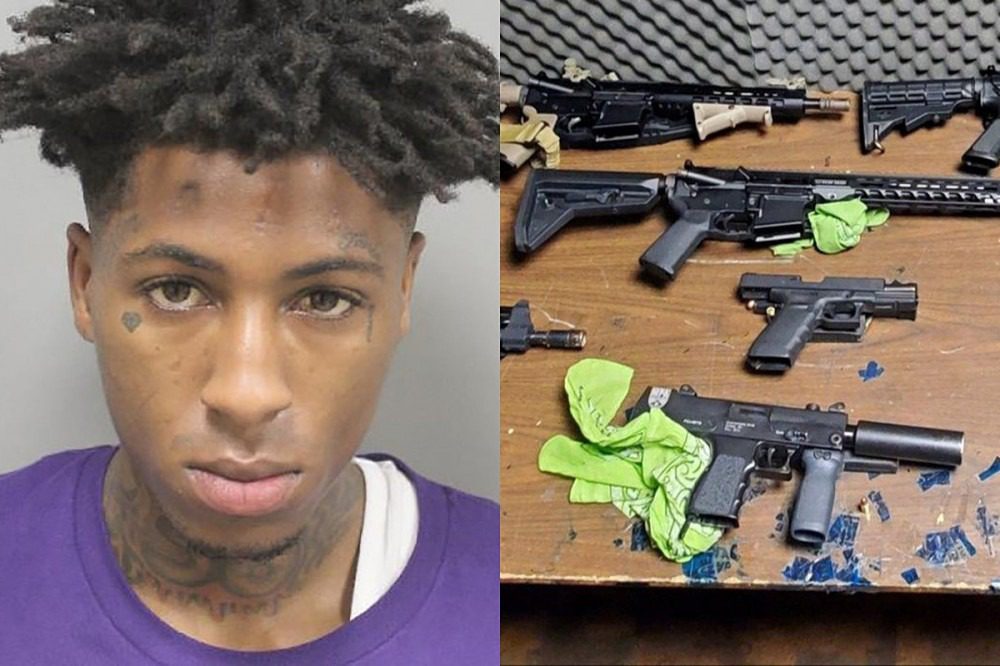 According to Baton Rouge's ABC affiliate WBRZ2 on Monday (Sept. 28), YoungBoy, born Kentrell Gaulden, was among 15 others who were taken into custody by the Baton Rouge Police Department (BRPD). Law enforcement had been called to an abandoned home following reports that a large group were outside brandishing weapons while filming a music video. The individuals were identified as members of two street gangs: Never Broke Again and Bottom Boy Guerillas.

When authorities arrived at the 3800 block of Chippewa St. around 4:30 p.m. on Monday, some people fled and were apprehended not too far from the scene while other men were detained and questioned. The BRPD said its officers were given permission to search three of the vehicles. They discovered about three grams of marijuana and one dose of Hydrocodone in a clear bag inside the cars. After receiving a warrant signed by a judge to search the remaining vehicles, police found numerous handguns and rifles, more marijuana, digital scales and Xanax. Seven additional firearms were found in the grass nearby, one of which was stolen from Texas.

According to police records, the marijuana was packaged to be distributed and the scales are reportedly used for packing and selling narcotics. Police arrested 16 people and confiscated 14 guns. The individuals arrested also had a great deal of cash on them, which was seized by law enforcement. NBA YoungBoy was carrying more than $47,000. He did not have a gun in his possession nor was he hit with any gun charges.

YoungBoy Never Broke Again was spotted leaving the jail on Tuesday afternoon wearing a purple shirt and a PPE mask.

The Top rapper's attorney, James Manasseh, told XXL in a statement this afternoon, "It is important to remember that when someone is arrested for a crime it does not mean they are guilty of anything. Kentrell Gaulden is innocent of the crimes he was arrested for yesterday evening. He did not possess any firearms nor did he possess any controlled dangerous substances."

"Law enforcement arrived on scene without any evidence of a crime occurring and immediately detained 15-20 young black men solely based on an alleged tip that firearms were present on the scene," the statement continues. "We still have the Second Amendment in the United States. The immediate detention of these black men was illegal in that it violated their Constitutional rights. The subsequent searches conducted by law enforcement were also illegal. Even with the illegal searches that were conducted, no firearms or controlled dangerous substances were found on Mr. Gaulden’s person or in his immediate control. Mr. Gaulden is innocent of the charges he was booked on last night and looks forward to defending himself as such."

XXL has reached out to the Baton Rouge Police Department for a comment on this matter. Check out the guns, money and mug shots of the arrested men, including YoungBoy, below.