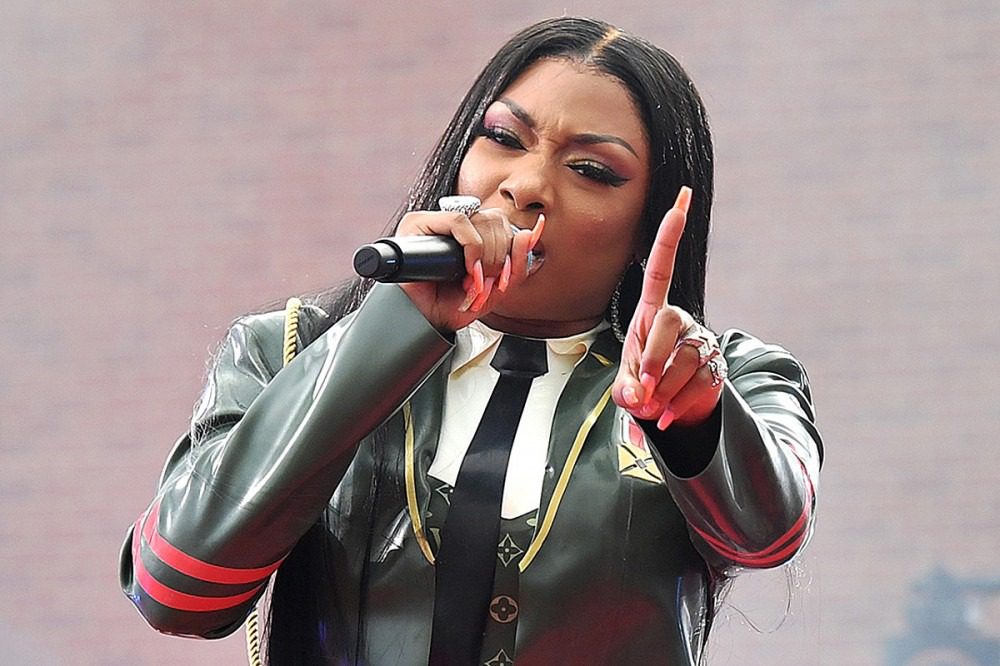 Megan Thee Stallion is here with her debut LP, Good News, and she's dissing Tory Lanez on the intro track, which samples The Notorious B.I.G.’s “Who Shot Ya?.” Listen and check out the song's lyrics below.

Although Megan has dropped a few songs this year, she hadn't put out anything addressing her shooting incident with Tory, which took back in July. The Houston native wasn't mum at all about the situation as she hopped on Instagram Live on several occasions throughout the summer to clear her name. The shooting incident, in which she said the Toronto native is responsible for the gunshot wounds she sustained in her feet, has made its way to Los Angeles Superior Court. In fact, Tory just pleaded not guilty to his felony assault charge earlier this week.

"Shots Fired" follows the release of Megan's collab with Young Thug titled "Don't Stop." She also teamed up with Beyoncé in May for the remix to her record "Savage" and Cardi in August for "Wap." Both tracks topped the Billboard chart. Good News also features guest appearances DaBaby, City Girls, Lil Durk, Big Sean, 2 Chainz and more.

Check out "Shots Fired" and the lyrics to it below.

(Verse One)
Imagine niggas lyin' 'bout shootin' a real bitch (Huh)
Just to save face for rapper niggas you chill with
Imagine me givin' a fuck it was your fuckin' birthday
You in your feelings, I just thought it was another Thursday
Now imagine me cockblockin' niggas, on some dry shit
I don't want you on a bitch, believe you wouldn't been invited (Been invited)
And if it weren't for me, same week, you'd a been indicted (Lock yo' ass up)
You offered Ms not to talk, I guess that made my friend excited (Hm)
Now y'all in cahoots (Okay), you a pussy boots
You shot a 5'10" bitch, with a .22
Talkin' 'bout bones and tendons like them bullets weren't pellets
A pussy nigga with a pussy gun in his feelings
Okay, he in the backseat and he calling me a bitch
We all know the shit I could've came back with
He talkin' 'bout his followers, stylist and goofy shit
I told him you're not poppin'
You just on the remix
Now here we are, 2020, eight months later
And we still ain't got no fuckin' justice for Breonna Taylor
Any nigga on that nigga side is a clout chaser
A bitch who he fuckin' or a ho that he payin' (Huh)

(Verse Two)
Who you takin' shots at groovy ass nigga?
Keep your broke ass outta rich bitch business
And that goes for you bitches too, that tryna get picked
Talkin' shit, I'll slide on you, thinkin' that you slick
Ooh shit, it's a lotta weak niggas in this bitch
They confused, they hate me but watch my videos, beatin' their dick
Who a snitch? I ain't never went to the police with no names
I thought a bitch that got her chance
That caught a loss, got something to say
I be speakin' facts, uh, they can't handle that (Uh)
They want me to be the bad guy? Lemme put my mask on
I was chose, I ain't asked to be this muthafuckin' cold
Still the brightest star and not the ones that's up in this Rolls
Keep it pimpin', always, action do the talkin'
I know you want the clout so I ain't sayin' y'all names
Oh, you out here ballin', huh? Who you get that money from
Ten toes down for whoever get the petty (Huh)
I be so content 'cause I know I'm a real bitch
And anything I say, I'm never scared to repeat it
You'd think I was a killer, how these niggas scared to shit
I pull up one deep, but niggas bring their whole clique (Aye)
Who you takin' shots at, goofy ass bitch?
Watchin' me succeed from your knees suckin' dick
I know you want attention from the niggas that I did
I'm a steak, you a side plate, shrimp, stay in your place
Real bitch, yeah, yeah, I ain't sellin' fairytales
FaceTime my nigga while my other nigga layin' there
Bitch think she sabotagin' something, tryna run and tell
Bitch, I got a bun with my niggas and they all aware, yeah
Who you takin' shots at? Shut up with your scary ass
No profile pic bitch your momma shouldn't had
Kick me while I'm down bad, I remember all that
Next nigga send a shot, I'ma sent it right back