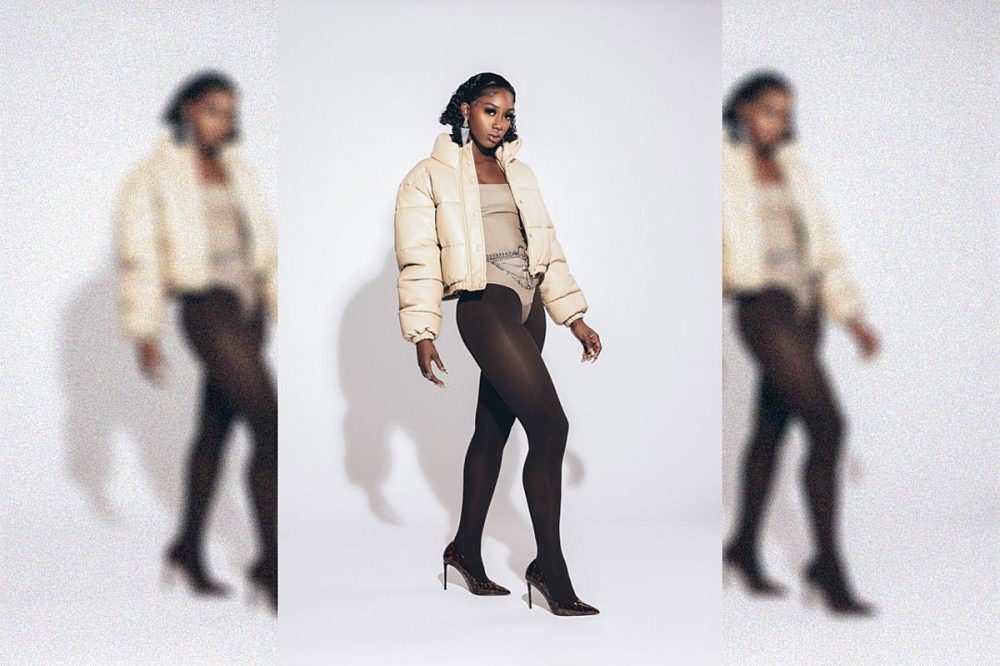 In the midst of an ongoing pandemic, the 2020 BET Hip-Hop Awards in October didn’t have the most conventional setup for new artists to shine during its annual cypher segment, yet Flo Milli still managed to take center stage amongst fellow rappers Adé, Buddy and Deanté Hitchcock. The 20-year-old rap wunderkind delivered crafty bars over the late Pop Smoke’s “Dior” beat, unequivocally grabbing viewers’ attention that evening, along with a nomination for Best New Artist. “I think it definitely brought exposure to me,” the Mobile, Ala. native later explains of the moment. “And it was a good step to show people that I’m actually working. I think it’s just starting to like, wake people up.”

It’s been one hell of a year for the 20-year-old rapper on the rise, but given the world’s current climate, that hasn’t stunted her short-term goals. She’s still been traveling after her critically acclaimed debut mixtape, Ho, Why Is You Here?, dropped this past summer, and peaked at No. 78 on the Billboard 200 chart. In the fall, Flo Milli headed back to her hometown of Mobile to visit friends and family and pick up one of her cars.

She turns 21 at the top of 2021, and while she can finally legally drink, her celebration plans are still up in the air, but she wants to bring those friends along for the ride. “Like, I want to go to Turks and Caicos,” she says pensively over Zoom, “but if I can’t go there, I’ll just probably do a mansion party with my friends or something.” Her capricious youthfulness is a sweet cloak over her modelesque looks, though when Flo Milli opens her mouth to rhyme, she transforms into a menace.

Flo Milli is one of a select few rappers bubbling out of Alabama (among them, 2020 XXL Freshman Chika), which is a feat in and of itself considering the state is far from a music industry hub. “In the beginning, all I really had was TV and social media or like YouTube and shit,” the young artist recalls of how she kept up with music on the come up. “For me, it was like, I wasn’t around [music] other than going to church and stuff and that was when I used to sing. But other than that, as far as like, a rap scene, I didn’t have an example or anything.”

Raised on neo-soul artists like Jill Scott, Anthony Hamilton and Erykah Badu, Milli, born Tamia Carter, tempered her soulful palate with a fandom for Nicki Minaj. She started singing at the age of 9 and rhyming at the age of 11. By 14, she was in a group with a few of her girls called Pink Mafia, which eventually dissolved. Though, it wasn’t until she was 17 that she pushed music to the forefront. “That’s when I started to like, actually go to the studio and put out music,” Milli remembers.

Then she had a handful of jobs before rap became her full-time hustle. Milli babysat kids, worked at Ross department store and an AMC movie theater before moving on to Metro PCS during her brief time in college. That job helped her hone her craft on the company’s watch. “I used to always get in trouble,” she admits. “It was like a tax place on the side of us and they would call my manager and snitch on me because I would be making music in there with the speakers and stuff.”

She continued making music over the next year, dropping a series of cuts and gradually gaining momentum. In 2018, her flip of producer Ethereal and Playboi Carti’s song “Beef,” retooled as Flo Milli’s “Beef FloMix,” became a viral hit, showcasing the diversity of her cadence paired with an unorthodox rhyming pattern. “I was like, out of all the songs, this one?! But, you know what, that’s how it works,” she remarks. The track, released on SoundCloud in late 2018, and now has over 60 million streams on Spotify, grew legs on TikTok over the next year, particularly for her sporadic, shit-talking punchlines. “I kind of was just trying new things and my fans responded to that,” Milli adds.

Despite having roots firmly planted in the South, Flo Milli spits bars with no geotag and carries a style that is dynamically disconnected from any region. It’s a trait that she keeps close to the chest, especially in an era where the number of her peers is high but authenticity runs low. While “Beef FloMix” set it off, her 2019 track “In The Party” kept the momentum going (over 66 million Spotify streams), and the record labels came calling.

Skane Dolla, A&R at RCA Records, and Shareen Taylor, A&R at RCA Records, signed Flo Milli to the record label in 2019. “When we met her, it was her look, her cadence on records and her tone for me,” Skane expresses. “She has a little bit of traditional rap—not just rhyming in three-fours like everyone does now. Shareen and I sat down with her; it was like, obviously this makes all the sense in the world.”

They were sold on sight. “She walks in the room and she’s tall, slim-thick frame and this beautiful chocolate skin and this attitude like, ‘I’m that bitch,’” Taylor adds. “The confidence radiates out of her and that’s not something that can be taught or you can buy.”

On Flo Milli’s Instagram account, which boasts over 540,000 followers, countless comments from young girls who are inspired by her self-assurance decorate her page. “It’s giving young Black girls something to be proud of,” Taylor continues. “She helps them build their confidence. It’s almost like she’s the voice for the youth, the misfits, the people that weren’t always included. They feel empowered.”

Now that the rising artist has hit her stride, Milli looks to rappers with a career trajectory such as Nicki Minaj for inspiration while navigating her own dreams. “Nicki proved that you can do this for a long time, you can be on top for a long time and, you know, not fall down,” Milli says. “You could persevere and make history as a Black female.”

As Flo Milli readies her debut album for the coming year, she has some collaborations in the works, along with adding more singing to her songs. It’s all merely a launchpad for what’s to come, which she hopes will include modeling, fashion and even film. “You know, I always knew what I wanted…,” she affirms. “I always knew I was gonna make it.”

Check out more from XXL’s Winter 2020 issue including our DaBaby cover story, an introduction to DaBaby's Billion Dollar Baby Entertainment label roster, an interview with South Coast Music Group founder Arnold Taylor, who discovered and signed DaBaby, one of King Von's last interviews, The Kid Laroi's move from rookie rapper to streaming success, how the coronavirus changed hip-hop, our interview with actress, writer and producer Issa Rae about her label Raedio, Marshmello talks about rappers he wants to work with and more.