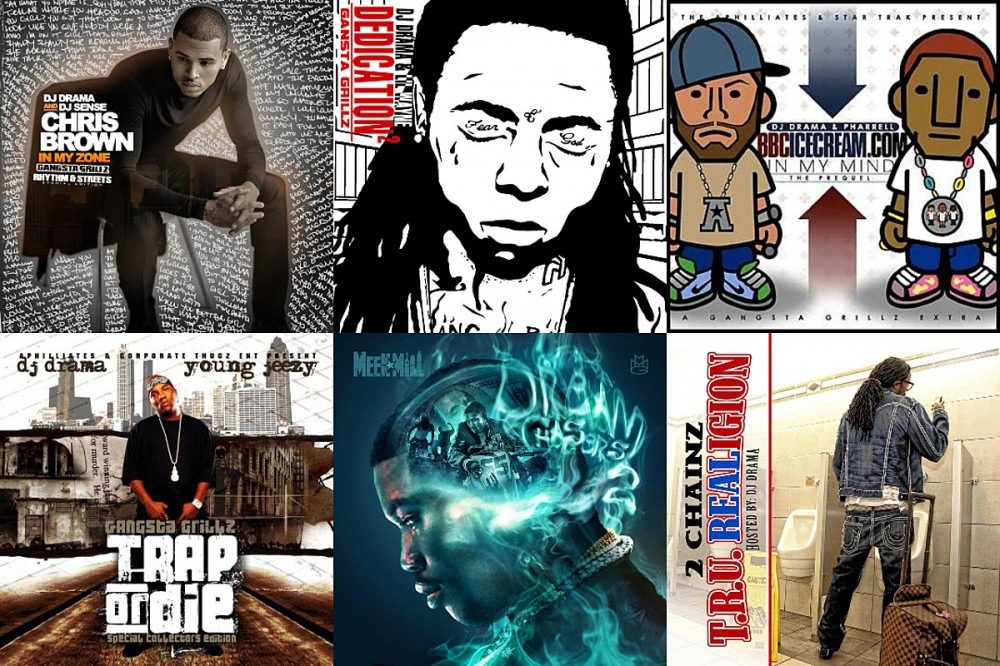 DJ Drama started plotting on his hip-hop legacy when he was a teenager in high school, with two turntables and a mixer at his mother’s house. Hearing the sounds of famous mixtape hosts like DJ Clue blast out of car speakers pushed the Philadelphia native to cement his own movement via what started off in 2004, as a Southern series called Gangsta Grillz—a term he got from simply playing around with words.

He continued to hustle song compilations at colleges, clubs and concerts, eventually upping the quality by tagging in hosts like Lil Jon, who then crafted the "Gangsta Griiii-zilllz" drop heard on Drama's fourth installation of the series. By the time the DJ Sense-assisted Gangsta Grillz 6, hosted by Killer Mike, Bone Crusher and David Banner, was freed, Drama noticed that he was succeeding in building an actual brand.

“I remember going to the bootlegger spot, this was when [50 Cent's] Get Rich or Die Tryin’ came out. And I seen like, an enormous abundance of Get Rich or Die Tryin’ and I seen an enormous abundance of Gangsta Grillz 6. I was like, Oh I made it. My shit is out here, not even thinking about how much money they was making compared to the amount I was making. But I was excited that I was getting bootlegged at the time,” he tells XXL.

Word of mouth in the streets made his series a revered culture stamp, with artists like Gucci Mane, Jeezy, T.I., Fabolous and plenty more expressing how they wanted in. For decades, Drama capitalized off that and made a name for himself by assuming the role as a main host who would pair their sounds with quotable, prophecy-like lines that were recorded in his Walker Street studio in Atlanta where the game-changing raid went down.

“Coming from a mixtape background and mixtape culture, the era before me, when the DJs spoke on the tapes, they would do a lot of store shout-outs…," adds Drama. "So, I tried to attack it from a different approach where it wasn't just about me shouting someone out or talking about the stores that were buying my tapes. It was more about actually adding something, adding a depth to the music and that was my bells and my whistles, my little sermons that I was giving."

The Generation Now cofounder finds inspiration from all over, whether that be personal things he's going through or what he sees when he steps outside the crib. Sometimes he writes things down and sometimes he freestyles. But either way, fans have always applauded how potent his talk game is. In fact, Drama says, “Anybody who doesn't think that the shit I be saying is not immaculately incredible are out their fucking mind.”

Nearly two decades and over 150 Gangsta Grillz mixtapes later, he's still keeping that same energy and most recently teamed up with Tyler, The Creator for the rapper's Call Me If You Get Lost album, released in late June. The 16-track effort debuted as the No. 1 album in the country in July. “It was kind of wild because [Don] Cannon even put it into perspective for me, just thinking about the origins of Gangsta Grillz and my modest mixtape humble beginnings," he says of the chart-topping effort. "And you know, hustling mixtapes for five dollars a pop or just starting Gangsta Grillz and creating a name. 18 or 19 years later, for it to be part of a No. 1 album is incredible. It's really full circle. It was a dope moment."

“I think it's been a long time since a lot of people have heard a project sound like that," the self-proclaimed mixtape president elaborates. "It's very reminiscent of my early tapes or the tapes of the heyday, like the [Lil] Wayne and the Pharrell. I just think the way Tyler attacked it was very creative. As much as it may feel like a mixtape, it still feels like an album in a lot of ways when you navigate through it. I think what makes it different is the nostalgia of if that's reminiscent of that time and space where mixtapes were prevalent.”

On the grounds of his past and the recent success with Tyler, DJ Drama hopped on Zoom with XXL to narrow down his top 10 Gangsta Grillz projects of all time from the catalog. In his own words, below you’ll find the ranking, rationale for each selection and memories from the recording process.

Disclaimer: “For all of the abundance of artists and tapes that did not get mentioned, I love you to death," DJ Drama says. "This was off the top of the head. It was an any-given-Sunday type of situation. So, whether it's fucking Tyga, [Lil] Durk, Lil Baby, Little Brother, Jim Jones, Cam'ron, so many that I've worked on that did not get mentioned but are a part of the Gangsta Grillz family and legacy that are definitely crucial. So for those of you who are not familiar, please do your research and go find out about all of the amazing Gangsta Grillz mixtapes that are out there.”