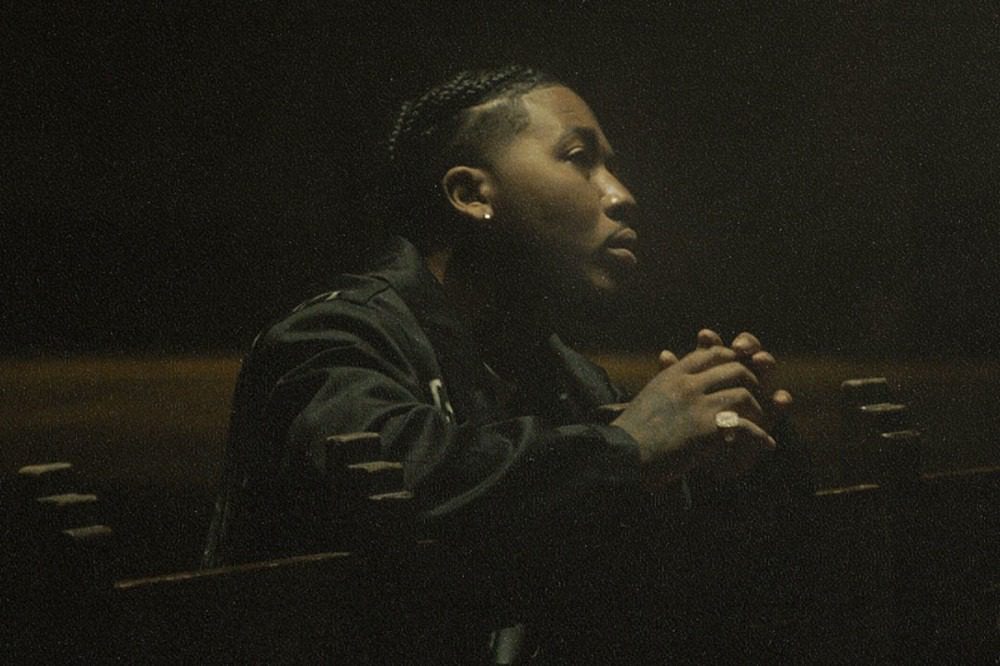 You can always hear the hunger in Cozz’s voice. Since signing to J. Cole’s Dreamville Records in 2014, the South Central, L.A. seed has built a steady fan base that adores his raw, life commentary on wax and the magazine of flows he uses to unload it. The 28-year-old rapper stamped his arrival with 2014’s Cozz & Effect, and followed up with efforts like 2018’s Effected. Since then, he took a step back from releasing new solo projects to get his mind right. That doesn't mean he was sitting back. The Grammy award-nominated Revenge of the Dreamers III album he was on dropped in 2019. Now, he ends a three-year hiatus on his solo efforts with the release of his Fortunate EP.

In order to put his best foot forward, Cozz admits that his journey back to the booth couldn’t commence until he faced himself internally. “Mentally, I wasn't in a good space," he tells XXL. "So, once I did that self work, everything else just kind of came naturally. It's a never-ending thing, but I'm at a really good place.”

In October, the title track of the seven-song EP arrived. Over a string-dominant foundation, produced by the combination of Ced, J. Cole, Jay Kurzweil and T-Minus, Cozz is in his melodic bag, coming from the perspective of dodging death and avoiding being swallowed by the streets. “Know niggas who OD/Get high as the nosebleeds/And I'm so fortunate/I’m in the floor seats.” he roars.

The second single, “Addicted,” arrived in mid-November. Produced by Tedd Boyd and Coleman, it’s effectively coated with shrilling trumpets and misty melodies. On the mellow banger, Cozz pens a blunt message about his own vices while touching on that of others'. “Ditchin' my addiction is like switchin' my pigment/Shit, if you got any advice, I'm here to listen/We all got plenty vices, and mine no different/Unless we talkin' ’bout women who/Grew up without they fathers, so they addiction's attention,” he spits.

Both of those records set the pace for the artistic explosion that’s been squeezed into just 18-minutes on Fortunate. “Higher Power” and “Juice Bars” showcase the rhymer's skill set in the upper echelon of lyricism. The pockets he glides through and cadences he uses mold finely into the arresting production. But the EP is equipped with its lighter bangers as well, heard on “Control Problems” with the sole feature, YG.

“Before a session, we usually just drink coffee, chop shit, maybe sip a little something to get the blood flowing, and we started talking about our life stories,” Cozz says about the studio session for “Control Problems." “And I think we were just talking about women and how controlling men are. And how controlling I used to be as a man to women when I was in my younger 20s. And how we let that shit go…” That spark of inspiration and growth flowed through Cozz’s mouth as he laid the hook and verse down in nothing more than 15 minutes.

While looking for features, he knew that YG would slide on the song’s rousing pulse, laced by Matt Hines. “We're both from Compton, L.A. And we just used to rock and party with YG and them after the shows,” he says about how the two initially connected. “So I've been on YG for a couple of years. We got a really cool relationship.”

Fortunate is balanced with sounds that are fit for the flex and being in your feelings. The latter idea is most exemplified on the outro “Cry,” a poetic masterpiece crafted over the production prowess of Jay Kurzweil and Elite. “Everything I say in that song happened and formed the man I am today,” Cozz explains. “I just thought about my childhood traumas and spoke about it… I shed a little tear after making it. That's why it's called 'Cry.' In the hook, you'll hear it, it's about how they tell men not to cry and as an adult, I've been learning how to do so and release that. So yeah, very important joint right there I'd say.”

Fortunate is a sampled-sized offering of what’s yet to come. Ready to win gold in the rap Olympics with a refined headspace as his cheat code, Cozz has been busy recording at places like J. Cole’s artist compound in North Carolina as he readies another effort for the first half of 2022. “I think I got itright,” the Dreamville signee says of his formula. What other proof do you need other than this EP?

Listen to Cozz's Fortunate below.

This is every hip-hop song that has gone diamond (10 million sold) in music history. From Lil Nas X to Drake to Eminem and more.