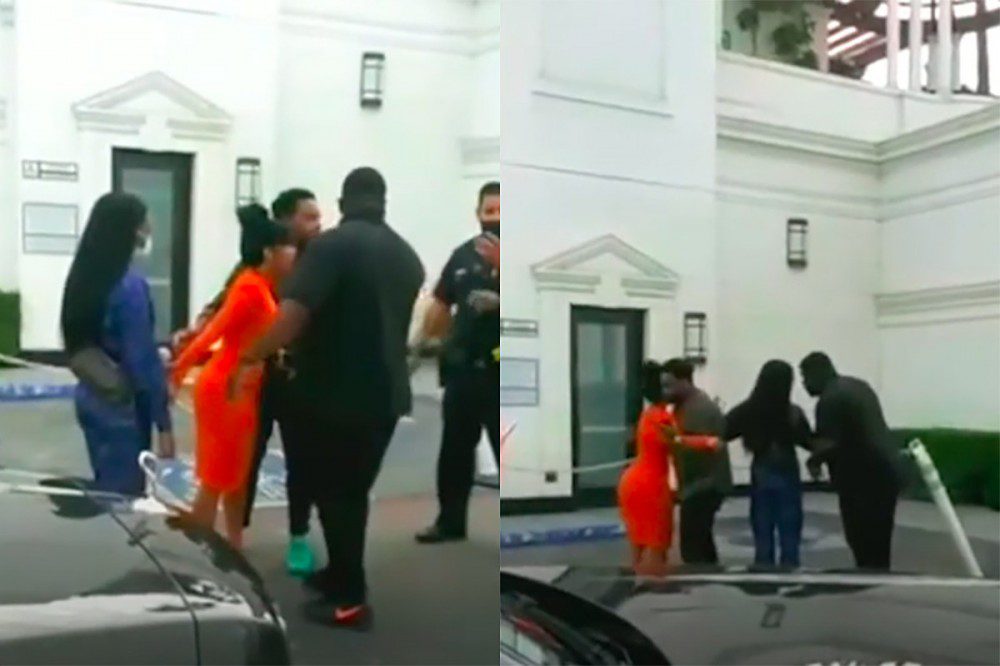 A video is circulating on the internet of Cardi B reacting hysterically as Offset was detained by police in Beverly Hills, Calif. over the weekend. The incident stemmed from 'Set being accused of allegedly waving a gun at supporters of President Trump while driving through a rally for the Commander in Chief on Saturday (Oct. 24).

In the video, which was obtained by Daily Mail and shared online on Sunday (Oct. 25), Cardi can be heard yelling at officers, telling them that her husband is unarmed. "Why is there a gun?," the "Wap" rhymer asks. "Why are you pointing a gun at him?." Meanwhile, the Migos member can also be heard saying, "I'm not going nowhere."

Shortly after, Offset is posted up against a wall while speaking with police officers.

As previously reported, the Atlanta rapper captured the series of events leading up to his detainment on Instagram Live over the weekend. He was sitting in the driver's seat of his car with his hands raised as law enforcement surrounded his vehicle.

The rapper was asked by police to turn his car off, but he refused due to an officer having a gun drawn. "I'm not doing no orders," Offset said. "You got guns out pointed at me, bro." He later says, "I'm not doing that, because you got guns out. I'm not fittin' to move my hand from my steering wheel."

The Quality Control Records artist was released thereafter, as told to XXL in a statement from his rep. "Artist and philanthropist, Offset, was detained by the Beverly Hills Police Department following an attack by aggressive Trump supporters," the statement said. "He was released shortly thereafter. Offset thanks his fans for their support and wishes everyone peace and safety during these trying times. He encourages everyone to get out and vote because nothing changes if nothing changes."

Although 'Set was not arrested, Cardi B's 20-year-old cousin, Marcelo Almanzar, was taken into custody by the Beverly Hills Police Department after the incident took place. He has reportedly been accused of allegedly brandishing a weapon at pedestrians. Almanzar is being held on $35,000 with a court date scheduled for Tuesday (Oct. 27).

The news of Cardi B defending and protecting her husband amid him being handcuffed comes after she confirmed that they are back together after officially filing for a divorce last month.

See the video of Cardi B reacting to Offset's detainment below.