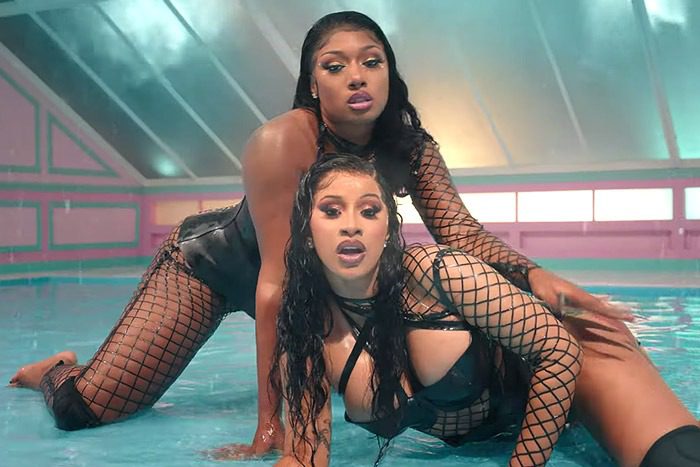 “The song is really nasty. The song always been nasty,” Cardi told Hot 97. “My verses and the hook has been the same since before Megan was there. So it just always been a nasty song and it’s like, ‘Who’s saying more nastier things than Megan?’”

Along with the song, they have debuted an epic video, which features cameos from Kylie Jenner, Normani, Rosalía, Mulatto, Rubi Rose, and Suki Hana. Donning head-turning looks, the two take over a mansion, where surprises await behind each door. A ferocious Cardi creeps with cheetahs in one room while rocking matching pasties, while Megan shows off her flexibility while surrounded by white tigers. They later get hands on while soaking wet in a pool in another steamy scene.

The Colin Tilley-directed clip was censored for YouTube, but the explicit version is available on other streaming services.

Cardi revealed that their outfits had to be flown in from overseas, but COVID delayed things. “It just took so long to get it done,” she said during a live YouTube chat.

“WAP” is the first single from Cardi’s long-awaited sophomore album, the follow-up to her 2018 debut Invasion of Privacy.