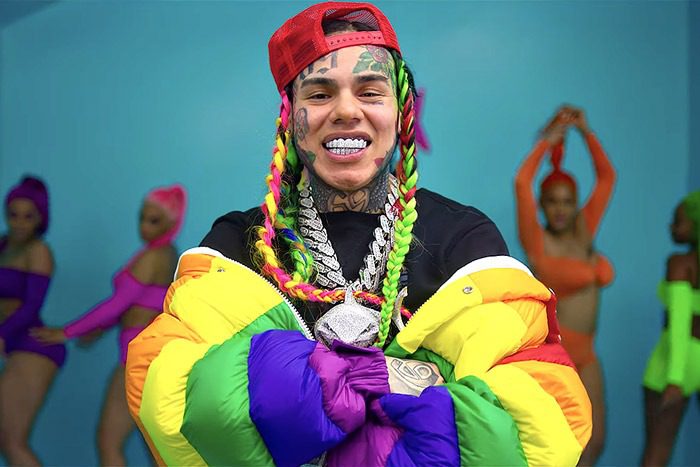 Hate him or love him, 6ix9ine is back.

Just a month after his release from prison to home confinement, the embattled rapper returns with new music. On Friday, Tekashi dropped “GOOBA,” his first release since his 2018 debut Dummy Boy. On the aggressive track, he unleashes his wrath on the haters and clout chasers, while having the last laugh.

He also addresses snitching on members of the Nine Trey Gangsta Bloods in return for a reduced sentence: “Tell me how I ratted, came home to a big bag.”

Along with the song, he also dropped a music video, which was shot under home confinement and features his girlfriend Jade and a rainbow of big booty models, who twerk while covered in paint. Tekashi dons a rainbow puffer jacket and cuddles with a dalmatian puppy. At one point, he even turns himself into an animated rat and shows off his ankle monitor.

6ix9ine was released from a Queens Detention Facility on April 2 to avoid contracting the coronavirus. He will remain under supervised release until July 31. Expect even more more music from him while in lockdown. He has set up a studio at home and is recording an English and Spanish album as part of his multi-million-dollar deal with 10K Projects.

He has already returned to social media, popping up during Tory Lanez’ Instagram Live and even feuding with Meek Mill, who called his new single “superrrrr trashhhhhhhhhhh.”