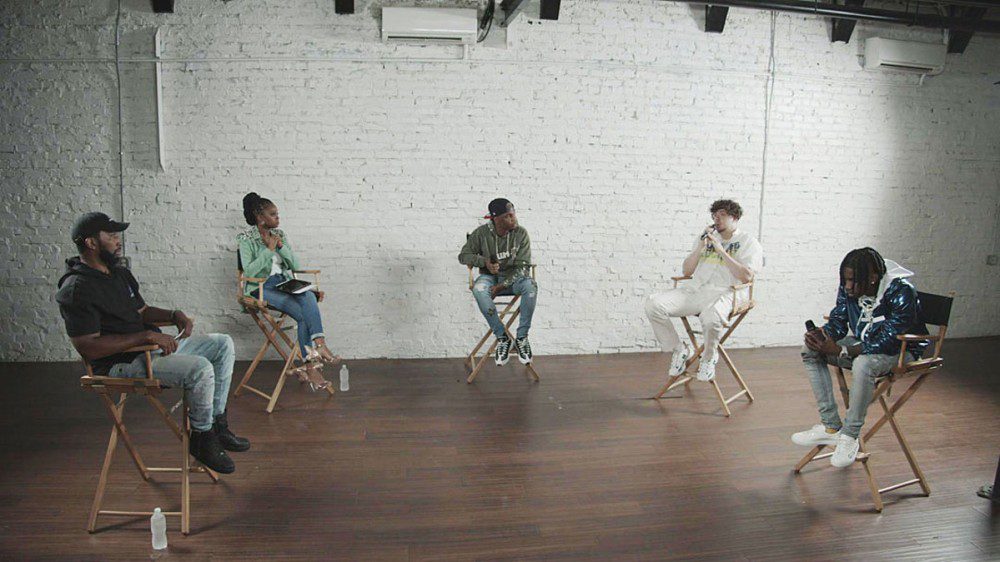 The country is currently battling two pandemics: the coronavirus and police brutality in Black and Brown communities. While the two issues are vastly different, neither can be ignored as they both have severely impacted America. However, the topic of police brutality hits a bit closer to home for some and XXL has offered a platform for the 2020 XXL Freshman class to discuss their experiences with police and racism with help from the social justice organization Until Freedom.

After delivering freestyles, impromptu alphabet word associations and sharing charismatic rhymes with their peers in cyphers, 2020 XXL Freshmen Polo G, NLE Choppa, Rod Wave, Calboy, Lil Tjay, Mulatto, Lil Keed, 24kGoldn, Chika, Fivio Foreign and Jack Harlow had the opportunity to discuss some of the important topics facing the youth and nation as a whole with their fellow classmates, alongside the founders of Until Freedom, activist Tamika D. Mallory, rapper-activist Mysonne Linen, activist-lawyer Angelo Pinto and activist Linda Sarsour, for A Fresh View on Racism, Politics and Social Justice. This conversation marks part 1, the past in which the Freshmen speak on their own experiences with police brutality, racism and educating others. Part 2 arrives tomorrow, Sept. 17, and part 3 concludes on Sept. 18.

Until Freedom was established in 2019, and strives to aid in the fight against systemic racism and racial injustice. Members of the organization have been seen protesting around the country—at times with rappers—following the many lives lost at the hands of police officers. Particularly, the most recent deaths of George Floyd, Ahmaud Arbery and Breonna Taylor.

Racism has long existed in the U. S. However, back in May, the country unified and stood on each others' shoulders following Black lives being blatantly taken by police officers. George Floyd, a Black man who died while being arrested by a Minneapolis police officer, 25-year-old Ahmaud Aubery, who was killed by the son of a former police office while jogging through his Georgia neighborhood, and Breonna Taylor, a 26-year-old EMT from Louisville, Ky. that was shot and killed in her own home after police administered a “no-knock” warrant, have resulted in a national outcry for change.

Since May, many of the XXL Freshmen participated in protests across the country—New York City, Atlanta, Louisville, Ky., Los Angeles and more—calling for action to be taken. However, before protesting this year, some have had unfortunate encounters of their own. During the roundtable discussion, they share their stories.

24kGoldn reveals that he experiences glaringly different treatment from police when he's with his Black friends as opposed to his White friends. "I feel like the police protect and serve everybody else, but for a lot of officers or a lot of police departments in general, it feels like there's open season on Black people," he tells. 24 has tweeted in the past about racism. "Don’t be racist it’s not even hard like just stop doing it," he wrote back in June.

Mulatto, who has spoken openly on being biracial, also shares her experience with trying to explain racism to her White family members that haven't had to encounter discrimination. "Being biracial and being around my White family, I have to educate them," she explains. "It's a sensitive subject ’cause it's like, how do I teach somebody that don't know nothing about that?"

Big Latto has been vocal about systematic racism and injustice. In doing so, she has also explained the meaning of her rap moniker, which refers to a person who has one Black parent and one White, but the term is deemed as derogatory by some. "A lot of people don’t understand my reclaiming of the term and won’t no matter how many times I speak on it and that’s fine," she wrote in an Instagram post back in May. "I come from a white mom who was offered the option of abortion and ridiculed for creating a seed with a black man. I come from a half-White family who doesn’t understand my frustrations, experiences, and challenges because they can’t relate."

Jack Harlow is aware of the racism that many of his friends and peers deal with, especially considering that he was raised around a large population of Black people. The "What's Poppin'" rapper, who attended protests in his hometown of Louisville, Ky. in honor of Breonna Taylor, says that regardless of how aware he is of racism, there's no way he can truly feel it. "I grew up surrounded by Black people and they would tell me about their experience, but being a White person, there's no way I can truly feel it," he expresses. "I can know it's there, but I can never truly know what it's like and know how real it is. And I think that's given me a certain responsibility because there's a lot of White people out here that deny the reality of it." "If anything, I try to listen more than speak," Jack adds.

During Jack Harlow's 2020 XXL Freshman Freestyle he delivered last month, the rapper paid tribute to David McAtee, a 53-year-old Black man from his city, who was killed at YaYa's BBQ, the barbecue stand McAtee owned. "Last night, the people learned how to throw stones/So they shooting gas at ’em to make sure they go home/In the past, it ain't last, but it's all changed/The word is unturned, how we leaving no stone/Killed him outside and they left him stone-cold/Left him on the street and left his family with a broke home/Barbecue man with a business, homegrown/Even gave away plates to the fellas on patrol," he spits.

Montgomery, Ala.'s own Chika shares her experience as a young Black girl growing up in the Deep South in Alabama, revealing that she was treated differently in school because of the color of her skin. "For me, as a Black kid growing up in Alabama, and being able to tell that my teachers were treating me differently than they treat White students, that's something you're conscious of from a young age," the 23-year-old artist recalls. "Even if you don't have the verbiage to actually describe it."

The Industry Games rapper was detained in May while protesting for George Floyd in Los Angeles. Following her release, she shared the encounter in a 30-minute Instagram video. "Today was peaceful until police began beating and targeting protestors," she captioned the clip. "Nobody deserved to be arrested or detained."

Lil Tjay's experience with New York City police wasn't glamorous either. The Bronx-bred rapper opens up about being arrested at age 12. "When I was 12, I was already getting felonies," he admits. "Not to say I didn't do my own fair share of negative things, but I'll say a lot of the things I used to get locked up for, shit I ain't even have nothing to do with." The self-proclaimed "Prince of New York" has admitted in the past to selling weed and dirty Sprite at 13. He also did a year-long bid in 2016 in a Queens juvenile detention center for a robbery, but that's what led him on a different path. Lil Tjay owns up to having been on the wrong side of the law at times, but there have been instances where he wasn't and he was mistreated.

Similarly, being chased by police was normalized behavior for Rod Wave. "I never really understood what it was until I got older, running from the police was regular," the St. Petersburg, Fla. native says. "It's a cycle. Getting caught, slammed on ya shit. I thought that was normal." Rod has rhymed about his encounters with law enforcement and the prison system. "Heard that my new charges PBL/That means punishable by life/Look, I don't wanna rot in my cell, mama/I don't wanna make last year my last year/Did you see how they did me in court, mama?/Why they keep tryna make me out a bad kid?/How come they ain't let me out this morning?/All my friends came in and got release dates/They don't let me out next Monday," he rhymes on "Red Light" from his mixtape Hunger Games 3.

Brooklyn's own Fivio Foreign notes that all police aren't corrupt, but accountability within the police force needs to be taken. "I feel like, not all cops is bad cops, feel me?" Fivio begins. "The ones that's good, they fuckin’ up because they not like [telling] they friends, or they coworkers or whatever, 'Ya buggin‘, you wylin'" or whatever. Or they not making them feel like they buggin'."

A point that Mysonne makes as well, demanding responsibility from men to inform on another when they are wrong. "As men, Black men, men just in the world period, we have to make our voices be heard," the veteran rapper explains. "The problem with it for me with the police is they get paid to protect and serve us."

Fivi, who was present at protests in his hometown, attended a meeting last month with elected officials, community leaders, Brooklyn Borough President, Eric Leroy Adams, and the NYPD to plan a day of peace, but to also find a way to cease police brutality.

As for Polo G, the rising Chicago spitter has seen countless videos of police brutality come across social video. Polo feels the attacks on Black and Brown communities happens often due to the way cops are trained to fight rather than protect, which makes him question why civilians don't have the right to fight back as well. "Like the videos, they almost normalize it," Polo states. "Like this supposed to happen, we defenseless, like you cant do nothin'. But in reality, they trained and taught to retaliate, if we, you feel me, get on that with them. So, why it cant be the same way?"

Polo G has touched on the way systemic racism has affected his life, too. "Stuck in the system, they just watchin' us fail while they sittin' back/The government cuttin' checks, but can't cut a nigga some slack/It's hard to get a job, so we hustle and flip a pack/It's all a set-up, no wonder why they call this bitch a trap/Life was messed up, a matter of time 'til that nigga snap," he raps on "Wishin’ For a Hero" from his sophomore album, The Goat.

Calboy, who hails from the Windy City as well, also opens up about his interactions with police as a child. "The first time I ever went outside been BS with the police," he remembers. "I knew it. They get behind me, I know the vibe. You feel it in your stomach. Like aight, it's finna go down."

Watch the 2020 XXL Freshman Class speak on their experiences in the past dealing with police, racism and more in this roundtable discussion with Until Freedom below.