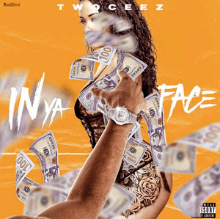 If you are looking for the hottest music video released this week, look no further, you’ve landed at the right place! North-Las Vegas-based rapper TwoCeez has just released a playful music video for his brand new single, “In Ya Face.” The title sounds cool, but wait till you hear the song and watch the visuals, where TwoCeez is literally throwing thousands of dollars from the second floor of his mansion, while his sultry girl is waiting for the cash to fall all around her. The sound is flawless, and while that’s no extraordinary fact with TwoCeez who’s been known for delivering his solid flow, he has undoubtedly surpassed himself on “In Ya Face.”

After releasing a music video for his song “One Of A Kind,” TwoCeez is going through a winning streak, and “In Ya Face” is the latest proof for that, so don’t miss it!