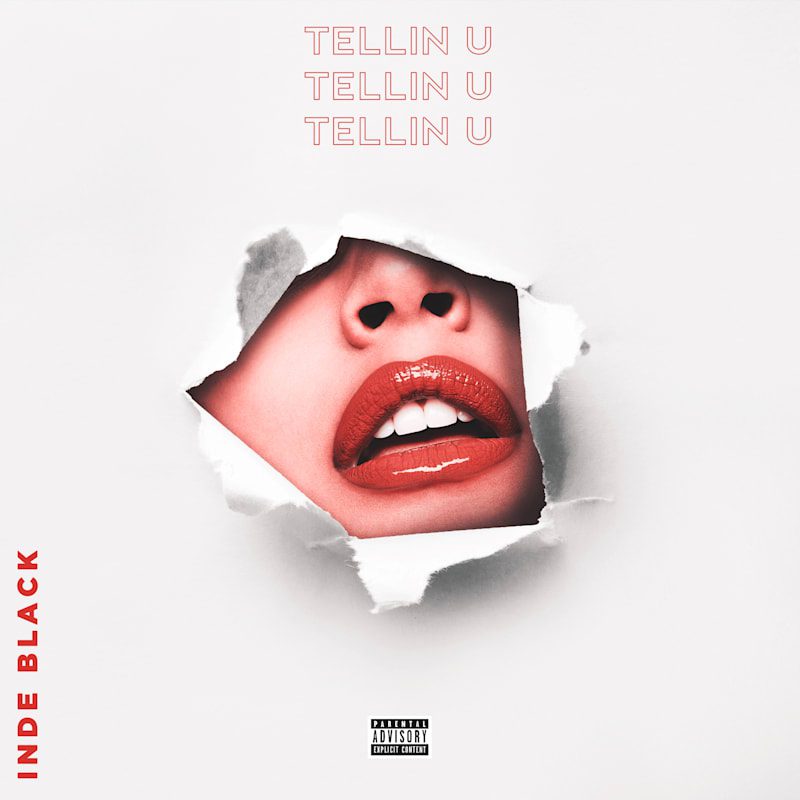 New Jersey – Inde Black releases his newest single titled “Tellin’ you” produced by Fearfraaz the RNB love song is filled with great use of melodies and harmonies. You can tell Inde was really releasing his emotions on to this record with his catchy hook leading in to the server that shows you his versatility within his craft. “Tellin’ You” is Inde explaining to his girl what she knows is real and what he loves about her, Even if he’s not there she knows exactly how it feels when he’s around.

Explaining that even when he was down and broke, she stayed around and held it down for him and now that he’s up, he’s holding it down for her, making his moves for her. Inde explains in the record that he knows how to give her exactly what she wants intimately and no one else can do it quite like him. We can hear this record playing on the radio and we can’t wait to see what Inde drops next.

We had the opportunity to talk to Inde and ask him a few questions.

A: The way this song came to life was basically a late night session in the studio. I had made a bunch of songs, and a lot of them were sad songs, low mood songs. The studio has no windows, so I had no idea what outside was looking like. So I stepped outside to get a breath of fresh air. It was about seven in the morning, and the sun was just starting to come up. I also wasn’t checking my phone for several hours, so when I looked at my phone, I had seen that my producer, Fraaz, sent me a number of beats. So I started listening to them. A lot of them had the same somber mood as the other low mood beats that I had recorded that night. But then I heard the beat to “Tellin You”. I immediately loaded the beat up into the computer, and hit record. It was almost like a burst of energy just ran through me, just from hearing the upbeat tempo, and melody. I laid a quick reference track, and got to writing. Cuffing season was just about over, so what I was feeling was what I had said in the song. Before I knew it, it was done.

Q: How has New Jersey crafted you as an artist?

A: New Jersey has so much talent. Not just in music, but in every art you can think of. But there is one thing that New Jersey lacks; support from One another. It’s almost like everybody is in competition with everybody, because there’s no one hotspot, there’s just a whole bunch of small cities. I feel like even though that is a toxic trait to have in the industry, it definitely build some of the greatest artist. We have a number of artists coming from New Jersey that are doing great things, and I feel like one of the reasons why they’re able to be so great and sustain a career, is because they know what it’s like to get 10 likes on a picture, drop a song and have nobody listen to it, even though people are always watching, that doesn’t always mean that people are going to support you. I feel like that resilience has really built me as an artist, because not only has it gotten me to be able to push a lot harder, but it’s made my music better because it’s allowed me to play with different sounds and styles, and really find myself in the art

Q: Not only are you an amazing artist, But you’re also a Producer / Engineer do you work with other artists on their records & how do you find that impacts your own creative process?

A:  I do work with a lot of different artist, producers, and engineers. In the beginning, I didn’t really like working with different artists because I always felt that I would have to go off of what they were doing, or their ideas. But as time went on, not only was I able to adapt and do better with going off of peoples ideas, I was also working more with people, and they were seeing my ideas and trying to go off of them. I thought that was kind of cool. Generally, I always feel like the more ideas, the better.

Q: Who’s your inspiration as an artist?

A: I have a lot of inspiration’s. I started off in music just making beats. Trying to make trap beats, you know metro boomin or future type beats. When Travis Scott came out, I thought his sound was very different, and it sparked something in my creative process. I also listen to a lot of new R&B, Like Eric Bellinger, PARTYNEXTDOOR, that type of sound.

A: Just more music. I have a lot in store for The family, and everyone who supports me. Follow me on Instagram @Indeblack and turn my notifications on to see when I’m dropping my next single! I’m definitely going for a project sometime late this year as well.

Q: If you could work with one artist right now who would it be and why?

A: If I could work with any artist, it would probably be Tory Lanez. I think his versatility is off the wall, and I really feel like me and him on a song together would really touch new boundaries in the music altogether

A: I would have to stay independent. It’s so easy to reach people nowadays, via the Internet. As long as you just stay consistent, and keep pushing towards your goals, you can really do anything you want. The label would just be messing everything up in the long run, taking percentage of the work that you create. Definitely staying independent

Inde It was amazing talking to you and we wish you the best of luck with this release, make sure you all follow Inde on instagram via @IndeBlack.